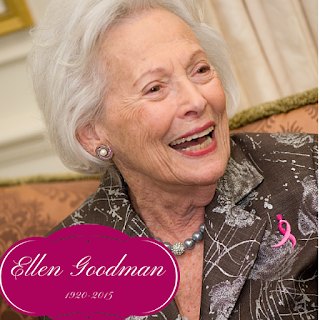 So sad to hear about the death of Miss Ellie Goodman, mom of the fabulous Goodman sisters, Susan G. Komen and Ambassador Nancy G. Brinker. It was a joy getting to know her while I was working on Nan's book, Promise Me. Miss Ellie was 90 years old then, still remarkably sharp, and one of the most authentically beautiful human beings I've ever known.

Tough and direct, she'd seen her share of heartbreak, but there was not whiff of bitterness about her. She was joyful, generous and quick-witted, but also deeply pragmatic and very smart. Once you meet Miss Ellie in the pages of the book, you quickly understand why Suzy and Nancy grew up with a deeply ingrained sense of service to others and an unbreakable bond with one another.

Mom was beautiful and stylish, making the most of everything, even when there was little money to work with. Aunt Rose passed along an evening dress with a beautifully crafted pearl and rhinestone collar. The fancy gown was too big and not something mother had occasion to wear, but she snipped off the collar and sewed it onto a plain black dress Fritzi had made for her. And when that dress became faded and worn, Mommy snipped the collar off and sewed it onto the next generation. Old photographs show her blossoming into that collar. At first, on a girl of twelve, it seems a bit much, but by the time she was in her late teens, it looks elegant and proud. Instead of the collar glitzing her up, she’s the one making the old hand-me-down look like something special.

… She understood the difference between service and servitude and wore her traditional role the same way she always wore the perfect shoes: she liked feeling comfortable, functional, and beautiful. Mom never questioned or denigrated the different choices made by other women, but this was her choice, and she never regretted it. An unquestionably liberated woman, my mother did exactly what she wanted to do…

A few months before my parents were married, Grandma Fritzi took ill with a kidney infection. A simple thing, these days: usually little more than an inconvenience. Ten minutes in the physician’s office. Ninety seconds at the pharmacy drive-through. Penicillin, the drug that would have saved her, was discovered quite by accident in 1928 and first tested on human subjects in 1939. In 1940, when Fritzi’s fever drove her to the hospital, that simple but effective remedy was in the pipeline and would be commonly available just a few years later—barely a breath in the scope of history. Meanwhile, sulfa drugs were all the rage, the most potent weapon there was against battlefield infection; soldiers were issued a powdered form in their first aid kits. But because of its low solubility, sulfanilamide tended to crystallize in the kidneys when taken internally. Fritzi’s doctor—drunk, Mother maintains to this day—accidentally gave Fritzi a toxic dose.

Poor Mommy crouched in the corner of the hospital room as her mother, this angel of mercy, died in twisting agony. It left her grief-stricken, infuriated, and radicalized. From that day forward, contrary to the “doctor’s orders” standard of the times, Mom was unfashionably fearless about questioning the judgments of God and doctors who think they’re God’s golf buddies…