When the Facts Don't Conform to the Theory & a New Kindle Free Read! 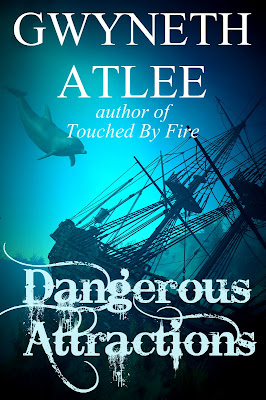 On Saturday through Monday, my historical romance alter ego, Gwyneth Atlee, is giving away copies of Dangerous Attractions for Kindle. Originally published by Kensington (under my short-lived Colleen Easton pseudonym) Dangerous Attractions is set in the gorgeous Key West of the 1850's, a city made rich on the salvage of the many shipwrecks along the reefs of Florida. When I first proposed the story to my editor, my preliminary research had cast the early wreckers as near-pirates, "moon cussers" who cursed the bright nights of a full moon and even lured ships onto the rocks in order to steal their cargos after the passengers and crew had drowned. When I visited Key West and dug into archival diaries, journals, and newspapers from the day, I found instead that the wreckers were absolutely serious about saving 1. lives and 2. property. They were legally rewarded for the latter in salvage courts, which allotted them a percentages of the proceeds from auctioned goods and insurance settlements. Though they were never paid for preserving human life, the wreckers--a religious and superstitious lot--saved hundreds, often risking their own lives to rescue passengers and crew in bad weather before beginning the dangerous work of off-loading the cargo. This research completely scrapped the plot I'd proposed, because there was no way I was dishonoring that kind of courage with what amounted to a pack of Disneyfied pirate lies, even though I had only a few months left until my deadline and a great big book to write! Fortunately, the real Key West came through, enriching my book's plot with details from the life of James Audubon (who lived there briefly), the Seminole Wars, the rough-hewn wreckers' frequent fights at the Green Parrot bar (which is still open; I visited two weeks ago and am wearing one of their t-shirts now!) and the even more intriguing tale of a woman artist used by another naturalist to do much of his work--with no credit for her mere feminine assistance. Here's what Booklist had to say about the resulting novel:

After surviving a shipwreck, Genna Whitworth, a Boston heiress fleeing from scandal, is stunned to learn she's been saved by a childhood friend she thought was long dead, a victim of the Seminole raid in which her father died. Eli Blaylock is also surprised to see Genna, the friend he blames for betraying his trust that fateful night. Amid secrets and guilt, Genna and Eli must decide if loyalty is stronger than love, and if sins from the past can be forgiven. The one word that describes this book best is "different." From the unique, culturally diverse setting of the mid-nineteenth-century Florida Keys to the integrated use of past and present, Easton has created a story a breed apart from the typical romance novel. However, it is indeed a romance, one that should interest readers looking for historicals beyond European ballrooms, as well as readers who never thought they'd like to read romance in the first place. Nina Davis Copyright © American Library Association. All rights reserved

I hope you'll join me in the tropics this weekend with the free Kindle edition of what one reviewer called "a tropical paradise turned deadly." Happy reading!

Kay Hudson said…
Colleen, I grew up in South Florida and have a soft spot for Florida fiction. Pretty sure I have a paperback copy of Dangerous Attractions, but I just added it to my ever-growing Kindle collection. As for the research, I try not to be too hard on other people's occasional mis-steps--I'm sure I've made more than a few of my own.
10:36 AM

Colleen Thompson said…
I didn't know you were from South Florida. It's so beautiful there, and fascinating, too. It's also one of the few places in this country that feels more humid than Houston--a permanent bad hair day! lol!

Thanks for d/ling Dangerous Attractions! Every little bit helps!
10:40 AM

Lynn Lorenz said…
I have to rush right over to Amazon now and get that book! Thanks for sharing Colleen! It's great how you handled that detour around history!
11:12 AM

Colleen Thompson said…
Thanks so much, Lynn! It's much appreciated!

Jane Myers Perrine said…
Are you telling me Disney lies? Sounds like a great novel--I'll hop on over and grab it.
12:15 PM

Colleen Thompson said…
Hope you enjoy, Jane! And thanks!

Also, when it comes to the tourist/entertainment industry, many don't let real history get in the way of a good story. Personally, I think the real history always makes a better, if more complex, tale.
1:25 PM

Darina said…
I downloaded it and I've just finished it and am very disappointed. my last book I got a couple of weeks out of, just reading a little each night before it put me to sleep ! With this one I only got 2 days and I blame it for the absolute total lack of work I got done today due to my nose being stuck in a kindle. I do hope none of your other books are like that but I suppose I'll have to try another one just to give you a second chance ;)
2:30 PM

Colleen Thompson said…
Darina,
Bwahaha! My evil plan of destroying reader productivity by robbing them of much-needed sleep must be working!

I absolutely PROMISE you'll get more done after downloading TOUCHED BY FIRE, INNOCENT DECEPTIONS, or one of my Colleen Thompson romantic suspenses tonight. (*Crosses fingers behind back.*)

Thanks for the laugh. So glad you enjoyed!
2:38 PM

Darina said…
Well everyone deserves a second chance I suppose. I'll try your suggestions and see what happens :)
9:50 AM

Darina said…
Well I gave you another chance. Unfortunately it was still no good for sending me asleep and once again I only got a couple of days out of it. I was no more able to resist the urge to take my eyes off my kindle than Captain Chandler could resist Charlotte !

BUT I'm a charitable person so I may consider trying another of your books, but if I keep finishing them in 2 days then I may have to forgo feeding the kids to feed my habit !!

Thanks for letting me know my books are falling short of your sleeping goals. ;)
8:20 AM