By Colleen Thompson August 23, 2012
No matter which genre of novel you're writing, the author has a couple of immediate imperatives: to create a relatable character and toss him or her into a situation you wouldn't wish on your worst enemy. Today, I'm going to talk about the relatable protagonist.

Creating a relatable character doesn't necessarily involve creating a likable character, just one with whom the reader can emotionally connect with and admire on some level. In the 2002 comedy About Schmidt, Warren Schmidt (played by the incomparable Jack Nicholson), is the ultimate in non-Save the Cat anti-heroes. I mean, the guy tosses a cute (but annoying) little dog down the garbage chute in the opening scene, for heaven's sake, and he says exactly what's on his mind, no matter how offensive and non-PC. Still, he's relatable because A. he's hilariously curmudgeonly, B. we've all had moments where we wish we had the guts to do or say exactly whatever outrageous thing was ripping through our brain--with no thought to the consequences, C. his act is so outrageously unexpected, it takes viewers by surprise, causing them to react with laughter before their guilt can kick in.

Especially in genre novels, however, likability is important. Readers won't often root for a character who's not worthy of love as the protagonist in a romance, and they won't much care whether or not the killer offs this person, either. So how can you make sure your protagonist has the audience cheering for him or her?

One way is to imbue the character with some extraordinary quality. In the case of Schmidt, he's extraordinarily blunt and witty, enough so that even though he's a horrible jerk at the film's outset, we admire and enjoy him on some level nonetheless. Funny viewpoint characters, such as Stephanie Plum from Janet Evanovich's One for the Money series, are so entertaining we'd follow them anywhere, just as we would those characters with a unique and fascinating worldview, i.e. the 15 year-old autistic savant hero of Mark Haddon's brilliant debut, The Curious Incident of the Dog in the Nighttime.

Another method is in creating the "everyman" or "everywoman" character, who's muddling through life the same as we are when an extraordinary event forces him/her to dig deep and bring out the essential strength, intelligence, and/or (especially) courage that we're all secretly convinced we possess. This type of characterization is especially effective in suspense, such as in the opening paragraphs from my own upcoming romantic suspense novel, Relentless Protector (Harlequin Intrigue, September 2012), below:

Lisa Meador was running late again, ridiculously late thanks to the passive-aggressive front office manager, who had scheduled her for yet another dental cleaning way too close to school dismissal. Still in her scrubs following her long afternoon, she was wound up in knots and already thinking about her next errand when she swung into what ought to be the line of parents waiting in cars at her son's elementary school.

Except there was no line. She was the last and only car. The last parent, picking up the last and tiniest of students, who stood with an impatient-looking teacher in attendance.

I'm so sorry, Lisa mouthed before her older-model silver Camry slowed to a complete stop. But the knot of tension in her stomach loosened as five-year-old Tyler came dashing toward the car, his huge smile seeming to run ahead of him.

It was the smile Lisa lived for, the one thing that had kept her breathing, putting one foot before the other, in the thirteen months since her husband, Devin, had been killed by a suicide bomber in Afghanistan.

Only twenty-eight when she was widowed, Lisa was determined not to dwell on the unfairness of her loss. Instead, she focused on the five good years she and Devin had had together and the tawny-haired boy whose antics kept her scrambling to keep up.

Several elements have us rooting for this overwhelmed young mother pages before the carjacking and kidnapping destined to change her life forever. Let's look at a few.

1. Everyone who's ever been in the workplace can relate to a boss or other co-worker in authority (Lisa's office manager) who either deliberately or indifferently interferes with one's personal life.

2. Every parent alive has felt guilty, inadequate, and stressed-out at times. For Lisa, this is accentuated, as she's a recently-widowed, working mother of a kindergartner.

3. People often feel harried when they're running late, and their minds are full of the list of errands to be completed. It's easy--and scary--to imagine evil slipping in at a distracted moment like this. 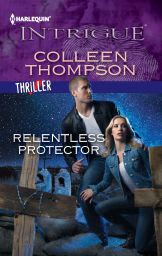 4. Lisa's not a superhero. She's the kind of person you might know or meet any day of the week. It's fun to watch such a person's transformation, and gives us faith that we could fight as fiercely to protect a family member, especially one as vulnerable as a cute five-year-old boy.

These are just a few ways to make a character relatable. Can you add some favorite examples of your own?