By Colleen Thompson June 27, 2013
Back in early March, I was contacted by someone from Amazon.com about the possibility of writing a licensed fan fiction story for the new Kindle Worlds program. I'm always game for a new challenge, and the idea sounded pretty exciting (as well as a way to fulfill my longtime fantasy of writing for a TV series, in a sense) so I was immediately on board.

At that time, there weren't a great many fictional universes available, but I quickly settled on the mysterious, sexy and seriously-addictive world of the ABC Family hit show, Pretty Little Liars. As I watched episode after episode, catching up on a great thing, I realized I'd begun to ship, or hope for, a relationship to develop between the beautiful, artsy Aria Montgomery and her long-time friend (with a potentially-tragic heart condition) the handsome Holden Strauss.

Playing in someone else's sandbox means you get to make the world over (to a point) the way you've always imagined that it should be. Though you didn't originally invent the characters, you get to appropriate them through dialogue and exciting new scenarios, including a frightening new mystery featuring that creepy little kid, Seth, from the doll shop back in Season Two. (I couldn't get enough of that kid!) The TV episodes themselves gave me a basic framework for the story I called Pretty Little Liars: The Jersey Devil Made Me Do It (Kindle Worlds Short Story)

, in the form of multiple points of view and story lines converging to a deadly climax. As I wrote, I could actually see the actors and actresses in their roles, could hear the characters' voices and envision their story on the small screen.

To make my story, extra-fun (and limit it to a manageable cast of characters so it wouldn't balloon to novel length) I took the four protagonists, along with some uninvited secondary characters, out of their usual Rosewood hometown and sent them on vacation in a fictional Jersey Shore community based on the wonderful boardwalk town of Wildwood, very near to where I grew up. I also picked a specific point in the series' timeline to set the story--in my case, the week prior to the opening of Season Three, when the girls were about to begin their senior years. This allowed me to go back and check where each couple was, relationship-wise, and where each character was at that moment, as far as past traumas and events in the show went, so I could keep from clashing with the source material and pulling readers out of the story I was telling.

Those early decisions, 1. limiting the story-space and cast and 2. choosing an appropriate point in the series timeline, proved crucial and allowed me to write the entire novella, about 36,000 words in total, in a very abbreviated timeframe.

The story also gave me an opportunity to incorporate another facet from my personal background, the fascinating, if somewhat creepy, legend of the Jersey Devil, into my tale, putting an exciting new spin on what could have been no more than a knock-off and making it my own.

The result was more than a good time; it breathed fresh life into the other contracted work I'm writing and gave me the courage to take more chances there. It reminded me of a time when I wrote simply for the joy of it and not to make a living. It felt like play, though I worked very hard to bring the story in by deadline.

If you would like to try your hand at playing in someone else's sandbox for the Kindle Worlds program, please stop by Kindle Worlds for Authors to learn more about submitting and see the current list of available fictional universes. To check out the Kindle Worlds store, please click the link and explore.

And if you're a fan of the show Pretty Little Liars, I hope you'll check out my story and let me know what you think! 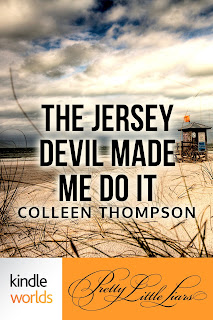