Me, this man, and the one thing Kim Davis will never understand about marriage 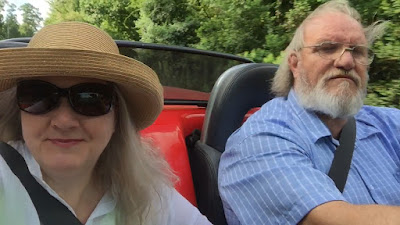 So the Gare Bear and I have been married 32 years as of today. The first three words he said to me were "I love you," and I hope those will be the last three words I say to him. Words are my stock in trade, but I have none to express how truly grateful I am to have this beautiful, funny, intelligent man in my life.

Over the past three decades, we raised two children to responsible, dynamic adulthood. We've traveled the world together, negotiated the treacherous territory of cancer and chemotherapy, and lived together for several months on a fire tower almost entirely cut off from civilization. We've debated politics and fought over money. We keep gaining and losing the same 50 pounds. We're still into each other. Still onto each other. The only thing we're religious about is doing the New York Times crossword puzzle together every morning.

This is a concept people who oppose marriage equality don't get. (Along with the concepts of civil rights, science, separation of church and state, and MYOFB.) As irritating as she is, I feel bad for their new patron saint, Kim Davis, the Kentucky county clerk being lauded for defying the Supreme Court decision to recognize the civil right of any legal adult to marry the legal adult with whom s/he feels at home. The concept of marriage Davis is supposedly championing doesn't include the kind of marriage Gary and I live in. Our marriage is not sacred to us because God said so; our marriage is sacred to us because we said so, and our public commitment to keeping it that way entitled us to the legal and financial benefits of marriage. 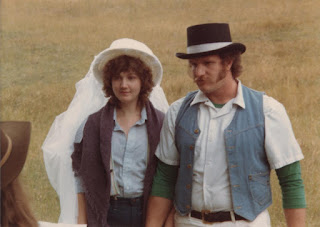 We had already been living together for a while before this delightful post-hippie nuptial be-in on a mountaintop, and in Montana circa 1983, we were legally married by common law from the time we opened a joint bank account, indicating our status as "married". Why the ceremony if we were already legally married? In fact, why be married at all, since we were doing fine living together? Back then, I had no logical or illogical answer. We had no clue what this marriage would turn out to be, but we felt it was something precious and important, and we wanted to reinforce and protect it--from the erosive power of time, from the corrosive power of insecurity, from the nattering of all the people who thought we didn't belong together, and from our own inevitable f**k-ups.

Now, 32 years hence, I see the accidental wisdom in that. I still can't quantify exactly what marriage means, but I know this isn't about one man and one woman--insert Tab A into Slot B--this is about One Gary and One Joni. He is who he is, I am who I am, and what we are together is We Are. There is no other marriage like ours, because every marriage is unique. That's part of what makes each marriage precious. 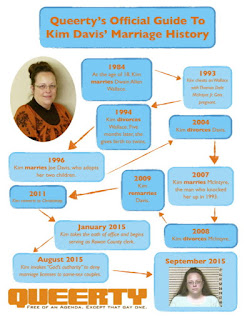 I'm fairly sure Kim Davis is not thinking of all this on any existential level; she just hates homos, as conveniently prescribed by the almighty god who was created for the convenience of haters. (As Gary succinctly put it when the whole thing started revving up, "She's not Rosa Parks. She's the bus driver.") Right now, she's riding this 15-minute wave of fame, a heady experience most dumpy, sullen bureaucrats can only dream of. But the irony of this particular person being chosen to champion the sanctity of marriage is like tin foil between the teeth of anyone who actually understands the true sanctity, the rarity, the inexpressibly precious stroke of luck and dint of industry that is a long, loving marriage.

At the end of the day, all the bloviating and grandstanding will come to nothing, and most Americans will accept what other first world citizens accepted a long time ago. Some people are gay. Get over it. If you truly believe that healthy marriages contribute to a healthy society, don't screw around on your spouse and shut up about the spouses of others.

Until that day, I think it's important for heterosexual couples who thrive in solid traditional marriages to keep speaking up for the civil rights to which all people are entitled. So here's me and the Grizz. My Gare Bear. The love of my life. My husband, for better or worse, till death do us part.

Anonymous said…
Well said, Joni. I was married for 33 years, til death did us part, and nothing anyone else did, no one else's marriage or divorce, no one else's religious beliefs, sincerely held or not, had the slightest effect on our marriage.