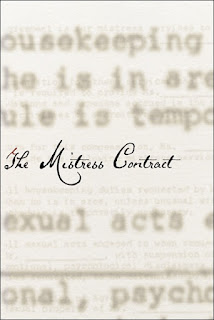 Last week I read a book that literally set my brain on fire. My brain. Was firing. Neurons. Axons. Claxons. I’m talking about intellectual orgasm. And I suspect I’m not the only one. BEA goers rapidly snapped up the entire supply of The Mistress Contract

advance galley copies, which were cleverly presented in plain brown bags. (The book is due out in October, but I was able to beg a PDF from the publisher.)

I’ll admit it, curiosity — prurient interest even — kicked it straight to the top of my TBR pile. I inhaled it, stumbled gobsmacked around the grocery store for an hour, then returned home and inhaled it again.

The book opens with the document which we're told the anonymous author actually sent to her wealthy lover in the 1980s. A single page generated on an old-school typewriter, it pitches a straightforward deal: He will provide adequate accommodations for her and cover her living expenses. She will provide 1) all housekeeping duties and 2) “all sexual acts as requested, with suspension of historical, emotional, psychological disclaimers.” For the duration of the agreement, She will be his “sexual property.” Party the second, we’re told, promptly telephoned to accept the proposal.

What follows is part performance art, part character study, part Socratic dialogue. We’re told that we’re reading the transcribed conversations of He and She, recorded while they were in the car, at restaurants, and yes, in bed. He and She are fully aware that the reader is in bed with them. (The recording device takes on the personality of something purchased from AdamandEve.com.) Even when the conversation is about literature, politics, power, and other far flung topics, the context of the talk and the electric connection between He and She creates a deeply sexy environment in which disbelief and political correctness are quickly suspended.

What shocks in The Mistress Contract

is the discourse, not the intercourse. The Foucault, not the f#@king. As He and She go at it with the brainy chemistry of Beatrice and Benedick, the naked opinions expressed about men, women, and feminism are challenging, frequently infuriating, thought-provoking and just plain provoking, witty, poignant, and astonishingly progressive, considering the context of the recordings. (Think “telex” as opposed to email.)

I was warned and I agree that this book is going to make people want to throw things — most notably the book itself — and it sparked heated dialogue between me and my husband, between me and my daughter, between me and the guy sitting next to me for three hours at the drivers license office. This will be the brave selection that turns book club to Fight Club. Most important, it ignited heated dialogue with myself, made me ask unsettling questions and struggle with unexpected answers as a woman and an artist. If this book doesn't make you think - and rethink - darling, candidly, you need to get laid, preferably by a smart person.

The anonymous author (I have my theory) and publisher (Unbridled Books) definitely get an A for audacity. I have my thoughts about various ideological particulars and some opinions about the origins of the book, but I’ll reserve these until The Mistress Contract

comes out in October, at which time I hope you’ll all buy the heck out of it, read it cover to cover in one sitting, and fling it at someone you love.

Kathryn Peterson said…
Wow, I sort of want to throw it right now, just from reading this post! Sometimes the best books are provocative and challenge us--often times the most influential works are those that make us think. That said, I do hope that the book rises above the gimmick--from what I've heard, it feels a bit false that way. But from what you've said (I love the Foucault reference, ha), maybe there's more to it than meets the eye. Your review has made me at least consider it now, so thanks.
5:46 PM

Kathryn Peterson said…
Oh, and one of my favorite books is Tess of the D'Urbervilles, which I threw across the room the first time I read. I threw it because I was furious at the ending, not because it wasn't right, but because of how unjust I thought it was for Tess. I can count on one hand the books I've thrown, and, with one exception, they've all ended up my favorite books.
5:51 PM

Joni Rodgers said…
Not surprised to hear that criticism. It's the easiest thing to say, especially when the book's not out there yet.

I'll definitely be interested to dialogue in this space about the origins and ideology when people actually have it in their hands.
6:03 PM

Kathryn Peterson said…
Definitely. And if it opens the doors for more discussion of these issues, I'm all for it. I wonder if the marketing actually may make it SEEM more gimmicky than it is. Perhaps I picked up on what's "easy to say" because the marketing itself is focusing on those "easier" aspects. I do hope that people will focus on the deeper issues. I love how you say that Book clubs may turn to Fight Clubs--I just hope that really happens. If you had heated discussions with both G. and J., though, perhaps it will.

And it's interesting too, because I'm getting involved with The Vagina Monologues again this year, and there's a monologue in there about a woman who is a sex worker by choice. This strikes me as a little similar (again, I haven't read it obviously, so maybe not), and it raises similar issues for the audience. I had a student one time who stripped by choice as well (and gladly announced this to the class) in order to put herself through school. Yet she called herself a feminist. I remember wavering between admiration for her and being a little repulsed by the idea, as well as not entirely believing her. It's a fine line--and a tough call.
9:45 PM

BIG DOG said…
Positive site, where did u come up with the information on this posting?I have read a few of the articles on your website now, and I really like your style. Thanks a million and please keep up the effective work. Cleto Reyes Boxing Gloves