By Colleen Thompson April 20, 2012
Do you exhaustively research before you begin work on a writing project, or instead, do you concern yourself first and foremost with story and only afterward go back and clean things up? I've known champions of both methods, and I've also run across those who have erred on one side or the other. Some would-be writers delve so deeply into the research that they become hopelessly mired in it, so much so that they risk never actually getting to the writing. Or they worry that unless they become a leading expert on the area in question, they won't be able to pull off writing about it convincingly. Others whip through the story and then belatedly find out the research doesn't at all support their plot points. When they try to rearrange the scaffolding, the whole sad mess collapses, never to rise again. My solution has been a hybrid approach. While preparing to embark on a project that includes an unfamiliar component, I spend a couple of weeks checking out primary source websites, read two or three books, and sometimes (depending on how important a part I feel the subject will play in the completed manuscript or how confident I am about selling the idea) making contact with an expert. (This may include traveling to the book's prospective setting or experiencing something crucial, where possible--such as a horseback tour of ranch country or a flight in a glider, as I've done a couple of memorable occasions.) This preliminary research always gives me a number of interesting ideas and helps to shape the story, but at some point, I shove it all aside and focus on the characters and the inciting incident. Most often, I begin writing at this time, just noodling about until I find my opening. I'll usually write a few "discovery" chapters to get to know the characters, and then I'll stop to write a synopsis for the book proposal. (I generally sell on proposal--or try to.) Once I have the plot sketched out to make sure the story works as a story, the protagonist has a satisfying character arc, and all that good stuff, I usually come up with a list of further research questions I'll need answered. As I work on the chapters, I look up any "road-block" questions but often leave the detail stuff for later. I'm a big fan of jotting myself to-do notes inside the manuscript so I'm not stopping to research constantly and interrupting the flow of the writing. It's a survival technique learned from writing on short deadlines, but it's an efficient use of time, too, whether or not you're working under contract. I'm also a big fan of the "fake-it 'til you make it" approach, where I do my best to bluff the reader into thinking I know way more than I actually do. I start this by leading off strong with convincing details. Once I've earned the readers' trust, it buys me a little room for fudging as the plot demands. As a former middle and junior high school teacher, I've developed some pretty strong b.s.-ing skills, but when it comes to pulling off a book, even those are not enough. That's why I have good beta readers/critique partners to call my bluff when needed. And if the material's especially tricky, I definitely do some detailed fact checking with a expert in the field. Thankfully, most are willing to help a novelist who expresses a commitment to "getting it right." People hate seeing their area of expertise botched in books and movies, and they're often just as interested in what you do as you are in their field. Sometimes, I've had experts read passages from the manuscripts, though I don't hand them the whole thing because (confession time) it freaks me out to risk having them monkey in the works of the storytelling. At the end of the day, I make sure to thank everyone for their assistance by including them in the book's acknowledgments and (especially in the case of expert sources) sending them an autographed copy. I also often include a note in my acknowledgments section that explains that some facts might be gently tweaked, massaged, or even omitted in the service of the story. So far, I haven't had any complaints. The methods I have outlined may not work for everyone, but over the course of the more than twenty books I've had published/contracted, they've proven to be an effective way of dealing with the facts that inform fiction. Do you have any tips of your own to share or any questions about research? Pictured: One of my favorite research trips, to Fort Davis, Texas. 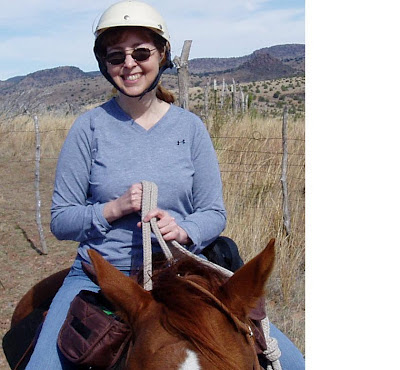 Colleen Thompson said…
Please forgive the missing paragraph breaks! Blogger stripped them out and I haven't yet figured out how to fix them!
4:22 PM

Jane Myers Perrine said…
I know you research correctly because you DO publish your books and they are good. I know writers who--as you mention--research and don't write. I think it may be an excuse not to write but if they're happy, that's okay.
4:53 PM

Colleen Thompson said…
Thanks for the kind words, Jane. I really do try to get my facts straight and communicate my enthusiasm for whatever it is I'm into at the moment. It's the best of both worlds, blending fact with fiction.

I sometimes meet people who have been researching a topic for years but can't bring themselves to go much further! But since they're learning and growing and enjoying themselves, what can I say?

Rachael said…
As a complete amateur, I try to do my research. I really do. But then I come across something while I'm actually writing and realize I have absolutely no idea. For example, I was once writing a story that involved a plexiglass cage and I realized that I have NO IDEA what a 1ftx1ft square of plexiglass sounds like when it's dropped on a concrete floor. Luckily, the next time I visited my favorite ice cream place, I noticed that they cover their windows with plexiglass squares about that size with concrete floors, so they allowed me to experiment, but I learned something. No matter how much research you do, there will always be something you have to look up on later drafts! I worry less about pre-writing research now, but still try to do some. I'm sure I'll fine-tune this as I gain experience.
10:46 PM

Kathryn Peterson said…
Ha! I research obsessively--probably too obsessively. But it also depends on what I'm writing. If I'm writing something that I already know a great deal about, I feel less compelled to research. But if I'm writing out of my depth, you betcha--I'm going to research. For my current project, I read over 2000 psychiatric case studies. Frankly, that was a bit obsessive, but I had an insatiable curiosity about the topic and really wanted to nail the internal world of my beautiful, mentally ill, wounded, psychopathic villainess. I was very pleased when the world famous researcher for the illness (Munchausen)offered to be on my dissertation committee, but more than a little daunted. I think I did even more research after that! When he said I'd nailed the character, I was soooooooooo excited.

But would I do it again? Probably not. Life's too short, and that kind of research is just too long. I'll probably become just as insatiably curious about my next project (the idea of which I am already dating, shhhh), but this time I am going to limit the amount of time it takes to get going.
1:52 AM

Kathryn Peterson said…
Oh, and I wanted to reiterate something Rachel said--"no matter how much research you do, there will always be something you have to look up on later drafts!" YES. Definitely. Another reason not to do too much research up front.
1:54 AM

Colleen Thompson said…
Hi, Rachael,
So glad you dropped by the blog. Like Kathryn, I agree that there's always more to research. But the love of research (and I'm one of the biggest research geeks out there) can definitely bog down the storytelling if it's allowed to take center stage. To me, the real payoff is seamlessly weaving fact into the fabric of the story in such a way that the research informs rather than dominates the story. The challenge is what keeps me coming back for more.

Wow, Kathryn, you're definitely making me want to read that manuscript. Sounds awesome!
11:20 AM