Why Steven Pressfield's TURNING PRO Might Just Save Your Life 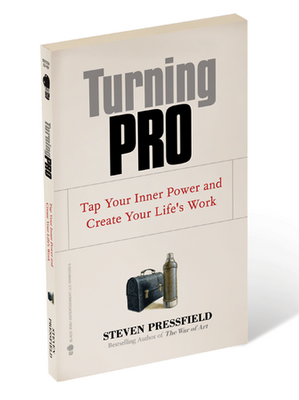 I've read a lot of books geared toward writers over the years, some fair, some good, and a very few (Anne Lamott's Bird by Bird, Julia Cameron's The Artist's Way, and Donald Maas's Writing the Breakout Novel, to name a few) great. But Steven Pressfield's Turning Pro is the first that's had me thinking it could actually save lives.

Beginning with Pressfield's groundbreaking The War of Art:Break Through Blocks and Win Your Inner Creative Battles and continuing with Do the Work, the acclaimed author helps readers identify and prevail against the psychological BS--everything from procrastination to perfectionism to mindless, destructive behavior--that prevents us from doing the work we sense that we were born to do. Both books, especially the former, are so helpful in framing the struggle to create in understandable terms that they have become a word-of-mouth sensation, as well as a tool that I recommend in every writing workshop I teach.

Pressfield's latest, Turning Pro, elaborates on the behaviors that differentiate an amateur/dilettante from a professional and, most helpfully, in my opinion, on the addictions and distractions that prevent all too many writers (and other creative producers) from reaching their potential. He talks about would-be creatives embracing--and often excelling in--less risky "shadow careers" that never fully make them happy, or, far more destructively, careening into negative behaviors to escape the pressure to produce.

In addition to the usual drug/alcohol addictions that you might think of, many creatives, according to Pressfield, become addicted to sex, to drama in their own lives, to getting into trouble. (No one expects a thing of you when you are broken, or in prison. The pressure's off, though the addiction might actually kill you.) Writers also become dependent on approval from without, which makes us so desperate for feedback from an editor, agent, judge, or mentor that we forget how to trust our own readers'/writers' instincts. Distractions, too, become addictions, robbing us of the ability to focus for more than a few minutes without checking our e-mail, Twitter feed, Facebook or sales rankings, and consigning us forever to the shallow end of the creative pool. (Favorite line of the book: "The amateur tweets. The pro works." Though, ironically, I'll probably Tweet this post once my day's work is complete.)

Speaking candidly of his own writer's journey (from the failures of nerve to the screw-ups to the suicidal moments), Pressfield doesn't set himself up as a guru (in fact, he warns against "gurudom," for both the guru and the follower) but as a scarred veteran of the creative wars who's sharing a few hard-won lessons. But through his examples and his wisdom, he might very well steer would-be writers from their most dangerous addictions. With this slim volume, he might save their physical, as well as their creative, lives.

Along with The War of Art and Do the Work, Turning Pro is very highly recommended.

For my review of Do the Work, click here.

Suzan Harden said…
This comment has been removed by the author.
12:11 AM

Suzan Harden said…
I'm assuming you got your first draft done since you're poking out your head into the public sphere a little more lately. Yay!

And Mr. Pressfield's books are definitely a kick in the pants. DH noticed the difference in my attitude after I read Do the Work. Thanks so much for the recommendation, Colleen!

Suzan
(Who really shouldn't type comments after midnight.)
12:13 AM

Colleen Thompson said…
Hi, Suzan!
Great to see you here, and it's great to be back at BtO.

I've been a busy girl, finishing edits, page proofs, and all that jazz on the two Harlequin books for this Fall, writing and sending off a couple of proposals (cross your fingers), and teaching an online class last week. It's nice to look up, take a breath, and write at my own speed for a while.

Hope you're doing well and you enjoy TURNING PRO as much as I did.
8:34 AM

Lark Howard said…
Thanks, Colleen. I have both a hardback copy and digital version of War of Art and read bits frequently. This sounds like a gotta-have!
9:26 AM

Steven Pressfield said…
Colleen, thanks for the very kind (and of course very astute!) words re "Turning Pro." It took a while to get this one right but I think it comes close to doing what I hoped it would. Thanks for your excellent take.
1:55 PM

Colleen Thompson said…
Hi, Steven,
So glad you dropped by! Terrific work, and I'm very happy to share it with other writers.

Thanks, Elen! I have several copies of The War of Art lying about. Sometimes, I set one on the edge of my desk and just glance at the cover every so often to keep myself in line. :)
5:27 PM