Thank you, Todd Akin, for reminding my why I wrote this book. 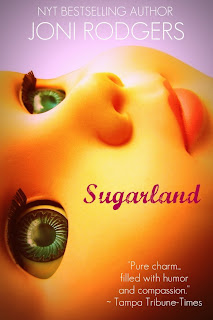 In 1999, Sugarland, my second novel, was published by Spinster's Ink, a brave little feminist indie press, in the USA and by Bertelsmann in Europe. It's a modern retelling of the Psyche and Eros myth, expanding on some of the feminist ethos I think is beautifully present in that story.

The lives of the two protagonists, sisters Kit and Kiki, are quite similar at first blush: they both have two small children and all the dreams and frustrations quickly understood by most young mothers. But Kit is married to a gentle salt-of-the-earth working man, and Kiki is married to a man who beats her. The complexity of the story arises from an incident that is described in succinct emotional and physical detail very close to the beginning of the book: Kit is raped by Kiki's abusive husband.

There is absolutely no question about the fact that she is not a willing participant in this act. Later in the book, this guy violently beats and rapes his wife, and the language purposely echoes the previous rape, which is less physically violent. The entire story (in my mind) spins out of the silent, insidious damage that is done to Kit as her children and her sister's children are sleeping on the floor just a few feet away.

In trying to deny and cover up what's happened, Kit loses herself and methodically destroys her own life. The arc of the story is how she recovers, but in the downward spiral, one of the self-destructive things she does is have sex with her boss. Again the language was very carefully constructed to demonstrate the difference between the rape and this situation, in which Kit is a willing participant.

From the Library Journal review (emphasis mine):

"When both sisters become pregnant for the third time, suffering ensues: cataclysmic loss for Kiki and overwhelming guilt for Kit, unsure of her unborn child's paternity after a virtual assault by Wayne and a spontaneous tumble with her boss."

You can read the review in full on Amazon, but you get the gist. The victim of a "virtual assault" clearly does not meet the moral standards of "legitimate rape."

"Meanwhile, Kit has two quickie flings, resulting in a pregnancy of questionable paternity. Readers with true equality of the sexes on their minds may object that Kiki's husband's cheating is treated as an actionable offense while Kit's marital excursions are permitted the luxury of mitigating circumstances."

I was stunned when I saw these two reviews and many others that had high praise for the book itself but utterly dismissed the entire premise on the grounds that this was not a "legitimate rape." No, this was a "quickie fling."

And what a feminazi I was for treating his "cheating" as an "actionable offense."

Note to anyone on jury duty: IT IS.

I was thrilled that book clubs far and wide embraced the book, but dumbfounded that so many women also condemned Kit for "having an affair" with her sister's husband. Book club discussions often centered on debates about what she could/should have done to prevent the rape from happening.

"Now you know why this book is important," said my wise editor, Joan Drury (one of the great unsung - or not sung nearly enough - heroes of publishing history.) "They're having the conversation. They're talking about it. That's a victory."

Thirteen years later, though Sugarland has enjoyed a little resurgence of popularity since I indie published the ebook edition, I'd begun to think the book was no longer relevant. Like a lot of feminist of my generation - those of us who came of age taking for granted women gynecologists, harassment laws, and access (theoretically) to safe, legal abortion - I slipped into a busy but complacent sort of ideology that allowed me to be a stay-at-home PTO mommy who wrote the occasional pro-choice letter to the editor.

Thanks to Todd Akin and the recent firestorm surrounding his galactically shit-headed comment about "legitimate rape," I've been reassured that Sugarland is still as relevant as ever. No dumbass is an island; this is not one guy's political faux pas, this is an agenda embraced by a LOT of people. (Check out Nerve's "Republican Guide to Female Anatomy.") This is a conversation women need to have with each other, with their daughters, and with the people who represent us in congress.

It would have been nice to think that the good fight fought by Joan Drury and her sisters would be sufficient to secure safety, health, civil rights, and respect for American women.

Note to my daughter: It wasn't. It never will be. The good fight goes on. Mamala's got your back, but it's your fight now. Get yourself into that voting booth and kick some ass.