By Colleen Thompson April 24, 2013
It's always gratifying when readers respond to a story of the heart such as my romantic thriller, Beneath Bone Lake. But it feels totally miraculous when the book, first put out by the teetering (and now defunct) Dorchester Publishing to very little fanfare and now picked up by Amazon's Montlake imprint, strikes a chord several years after its initial release. 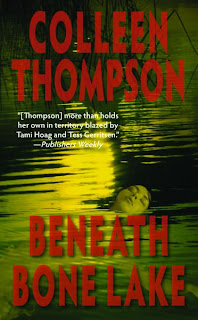 Returning from Iraq, where she's been working as a contract driver, young widow Ruby Monroe can think of nothing but reuniting with the little girl she's sacrificed a year of her life to provide for. But when Zoe and Ruby's sister, who's been caring for the child, turn up missing and Ruby finds their house in flames, she begins to suspect she's brought the war home with her...and she'll stop at nothing to win the most important battle of her life, even if it means trusting the one man she's been taught to fear.

With the Kindle edition priced at only $0.99 through the end of the month and sales rankings breaking Amazon's Top 100, Beneath Bone Lake is the story of how war devastates everyday families when it's fought for profit. Pick yours up today, or if you'd prefer paper, wait until June, when a brand new print edition will be released.