"Artists lead. Hacks ask for a show of hands." (A blast from the past and peek at the new #SteveJobsmovie) 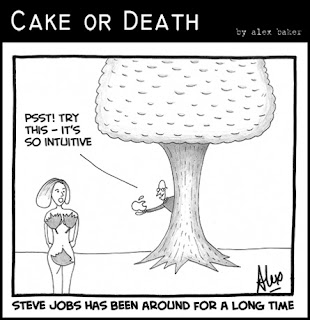 When a ghostwriter friend mentioned she was suffering from increasing pain in her hands (hazard of the profession), I told her, "I just posted something about that on BoxOcto last year." When I searched it out, my mind was blown a bit. It was actually posted in October of 2012.


Gary sprained his hand last night at work, and it's swollen up like one of those old fashioned baseball mitts. For years I've always kept bags of frozen peas specifically for the purpose of icing my aching wrists, fingers and hands after hours of typing. I got one out, and it was frosted solid. I suddenly realized I haven't had to ice my hands since last Christmas when Gary gave me a MacBook Air.

I'm not one of those rabid Apple heads, but this was a profound improvement in my quality of life. There are times when my ghostwriting schedule forces me to crank out 3K words a day (and if you're a writer, you know that 3K good words means also typing 5K off-the-mark words that end up cut or reworked.) Many was the midnight hour that found me lying on the floor fighting tears of agony, my hands and forearms piled with the fruit of the Jolly Green Giant.

The realization that it's been 10+ months since I had to plan for and facilitate that pain - it just blew me away. How did I not notice that? How was I not celebrating it every day? I suppose it's because the MacBook allows me to focus on (and celebrate) what I'm writing. The presence of pain is impossible to ignore; the absence of pain is something we take completely for granted.

A hallmark of great technology: it disappears into its own functionality. Instead of cluttering and upstaging life, it provides a vehicle for it. Like a really good bass player (or a really good ghostwriter), it provides structure and soul without calling attention to itself.

UPDATE: My MacBook Air is still going strong, and I eventually hunted up a matching low impact keyboard for my desktop PC. Typing is virtually pain-free and dramatically faster. After switching to the MacBook Air, I actually started transcribing interviews in progress. It's super slim in the bag and quiet enough that it doesn't register on the digital recording, and I'm able to insert my own thoughts and questions on the fly rather than depend on my sieve-like memory.

ANOTHER UPDATE: Okay, now it's October 2016, and I still have never had a problem with my 5-year-old MacBook Air. The battery life is not great anymore, so I may invest in a new battery. Other than that, it's still going strong. I've been using it twice as long as any other laptop I've ever owned, and I've used it ten times more -- which also makes it the cheapest laptop I've ever owned. After my PC died, I replaced it with an iMac, so my laptop, desktop, and phone now communicate seamlessly. Remember how I said "I'm not a rabid Apple-head" earlier? Yeah, well... praise God and pass the KoolAid.

And now for the trailer. Can't wait to see this movie, because anything written by Aaron Sorkin is pretty much a masterclass in dialogue and plotwerk. My motto for the foreseeable future: "Artists lead and hacks ask for a show of hands."