Who is Lucy Forrester? Jane Davis talks about her new novel and the transformative impact of childhood illness 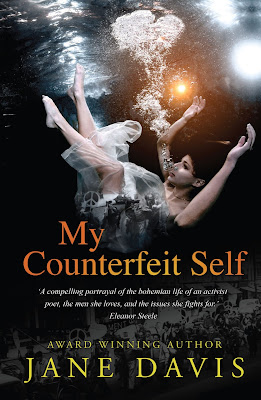 I've been too buried to blog lately, but I couldn't let a new Jane Davis novel drop without a shout out. Jane is the fabulous Brit who wrote (among several) Half Truths & White Lies, winner of the Daily Mail first novel award, and I Stopped Time, one of my favorite reads last year.

Today, Jane pops in to answer a few questions about her new book My Counterfeit Self, in which political activist Lucy Forrester (a cross between Edith Sitwell and Vivienne Westwood) is nominated for a prestigious award by a dead man with whom she had a love/hate relationship. Was it a cruel joke or a rare opportunity? Who is this Lucy Forrester?

What’s the story behind your latest book?
It’s the story of a radical poet and political activist called Lucy Forrester, who’s a cross between Edith Sitwell and Vivienne Westwood. Having been anti-establishment all of her life, she’s horrified to find that she’s been featured on the New Year’s Honours list. (This is list prepared by the Queen for people who have made a considerable contribution to British life in some substantial way – arts, culture, business, charitable works and so on). To be honest, the idea of writing about the life of a poet came directly from reader reviews. Several comments that my prose was like poetry. I had no idea if I could actually write poetry but this gave me confidence that I might be able to convince readers that I could see the world as a poet does.

It’s an intriguing title. What does it mean to you?
Lucy’s parents behave so appallingly that she is freed from any feeling of obligation to live up to their expectations. She moves out of the family home, decamping to bohemian Soho. In distancing herself from her parents Lucy adopts a new personality that she hides behind. Although she insists that she lays herself bare in her poetry, it’s keeping secrets from those who love her most that is her undoing.

We meet Lucy Forrester as a young child. How difficult is it to get inside the head of a young child and convey their consciousness without ‘talking down’?
I remember childhood as a very frightening place, and all of the articles I have read about childhood psychology reinforce that memory.

I don’t have children of my own but the mother of my godson put to me, ‘You only know what comes out of their mouths. You don’t know what’s going inside their heads.’ But, of course, the author does have to know. I don’t think that a child’s head is an uncluttered place. They are absorbing any number of new facts daily, and have to give them a context within their limited knowledge, something we as adults have to do less often – although we still experience similar pain barriers, learning a new piece of computer software, for example. I hope there is nothing twee about the way that I write children.

Lucy is a polio survivor. The impact of childhood illness interests you, doesn’t it?
Very much so. The child is set apart, both literally and figuratively. They’re looked at differently by family and friends. And, of course, they have to draw on tremendous inner reserves. I saw a documentary about Jim Marshall, inventor of the Marshall amp. He suffered from tubercular bones and spent his childhood in and out of hospital. At the time, with no effective antibiotic, his condition was potentially fatal. The disease starts in the lungs, spreads through the bloodstream and attacks the spine and weight-bearing joints. Cocooned in plaster casts, he missed out on formal education. It was his father who suggested that he try tap dancing as part of his physical recovery. That gave him an incredible ear for rhythm, and the rest is history. It’s impossible to say how different Jim’s story would have been if he hadn’t contracted the disease, but it’s fair to assume it changed him.

When I started researching the polio, I was surprised by just how many people in the public eye have suffered. Martin Sheen, Donald Sutherland, Joni Mitchell, GwenVerdon – and like Jim Marshall, Gwen was encouraged by her mother to dance as therapy for her polio-afflicted legs.

In Lucy’s case, I also wanted to give the idea of physical separation, a life lived on the attic floor of her parents’ home, her sense of abandonment, which leads to a fear of abandonment in later life. She calls herself the Out of Sight Out of Mind Child.

Why Polio?
At its peak in the 1940s and 50s, polio was the world’s most feared disease, paralysing or killing half a million people a year. Lucy contracted the disease just before the discovery of the vaccine, but even after the availability of the vaccine, people continued to die. In 1961 there were 707 acute cases and 61 deaths. And, of course, like the folk singer Donovan, a few unlucky children contracted the disease from the vaccine.

This isn’t the first time you’ve tackled the issue of survival.
No, I addressed it in These Fragile Things when my main character Judy faced her own near-death experience. In both books, there is the idea of a trade-off. You survive, but there’s a price to pay.

In My Counterfeit Self, Lucy isn’t the only survivor. Obsessed by her fear of nuclear bombs, she had been sold the line ‘the victims wouldn’t have known anything about it’. And of course, for many, that was true. But the final death toll at Hiroshima was double the estimated number of immediate casualties. Some survived only to die slow deaths, and then there were those who had to go on living, who had to rebuild.

You’ve mentioned Hiroshima. CND is the main political cause that Lucy throws herself behind. Why that choice?
Lucy is a rebel with a cause. Again, the timeframe of the novel made CND an obvious choice. Her early memories are of war. Fear that there was going to be a third world war permeated her adolescence and then 1956 happened, the year in which so many people were spurred into action because the government seemed determined to drag the country into war with Egypt over the Suez Canal. CND is one of the few causes that has remained in the news. Whichever your viewpoint, feelings tend to run high. I must admit, until I started my research for this novel, I was totally unaware of the plight of the British atomic veterans who suffered injury as a result of taking part in peacetime nuclear testing. I should point out that there isn’t a direct link between CND and the atomic veterans, many of whom are pro the nuclear deterrent. But the fact that our veterans remain uncompensated seems very unjust. Given the events of Hiroshima and Nagasaki, I refuse to believe that the risk of likely injury wasn’t foreseeable. I felt that the atomic veteran’s cause was something Lucy would throw herself behind unreservedly. And I took my steer from a Yeats quote that says it takes fifty years for a poet to influence an issue. 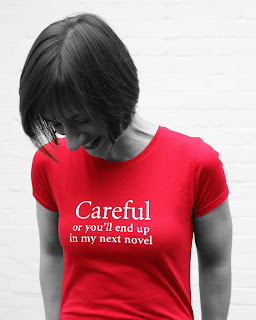 You also focus on the treatment of women at this critical moment in history. Why was that important to you?
It was impossible to skirt around it. I read about Carol Ann Duffy’s complaints about old-school poets groping young female poets and the sense of entitlement they had. When I think how things were when I first went out to work, I can’t believe how little I challenged that sense of entitlement. There were certain men you were warned not to get in a lift with (invariably older, invariably management, so there was no one to complain to). On the other hand, these were men you didn’t want to meet in the stair well. So you had the choice. The lift or the stair well. The lift was quicker. You took the lift. That was how it was. But this was the mid-eighties. You only have to watch a film like Twins - something considered to be family entertainment - to see that it was thought acceptable to ask a woman to dance and then grab her arse.

Arse-grabbing aside, at the time there was an inclination to treat work produced by women differently from work produced by their male counterparts. I read an article about the poet Stevie Smith recently. There was talk of her cropped hair, baleful expression, little-girl dresses. We were told she was dotty, batty, silly, odd, childish, droll, or “fausse-naïve” (Philip Larkin’s term). It’s difficult to imagine these descriptions being applied to a man. But the article goes a step further. Readers, we are told, are ‘reluctant to think of her as a professional poet, more as an amateur folk artist, a hit-or-miss ingénue (or enfant terrible).’ (Ouch!)

Pouka said…
Yeah carefull of that
paladins hack
5:27 AM