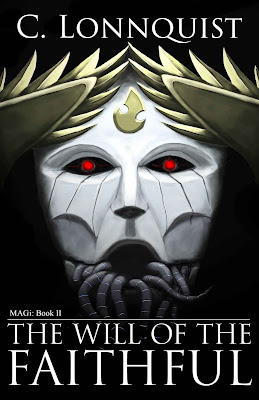 If you were irrevocably sucked into the mystic mecha/fantasy/action world of C. Lonnquist's debut novel, The Will of Machines, rejoice! The Will of the Faithful, drops today, picking up the story of these mammoth mechanical beasts and the intensely human characters who pilot them.


In the eagerly awaited sequel to The Will of Machines: MAGi Book I, C. Lonnquist returns fans to the planet Alterra, where the MAGi—giant sentient suits of armor that mysteriously fell from the sky—carry their Pilots through the embattled Warlands of Ord. A year has passed since the fall of the Black Palace and the revelation of the MAGi’s origins. The Pilots go their separate ways, driven apart by a horrifying new threat to the homelands they love. The Faithful, Cardinal Ecclesius’ army of corrupted MAGi, readies to march on Jarn. Soulless. Insatiable. Unstoppable.

Kaie, the young druid from Jarn, has grown from a girl to a woman to a warrior, fully prepared to die defending her peaceful people and the traditions they hold dear. She pilots the behemoth Cern—for now. The MAGi’s personality is evolving, becoming more complex. Some say dangerously so. Kaie and Cern, accompanied by resourceful Rozo and sarcastic scientist Max Roarn, journey to the mysterious Lizard Islands to seek help from the most reclusive Jarn tribe. Only their mystic boneseer can tell them if they’re already too late.

Oliver, a ruthless witchhunter turned spiritual warrior, walks towards a new light but is still plagued by his past. Piloting the Devout while struggling to regain his own lost humanity, Oliver leaves for Roku to meet two new MAGi Pilots from the Silent Lands. But someone else—a darkly beautiful destroyer—lies in wait, patiently calculating, plotting to reduce Oliver’s ironclad cynicism to naked vulnerability.

The Warlands rumble as old conflicts awaken, and now, the presence of the MAGi threatens to upheave a precarious status quo the disparate nations have maintained for thousands of years. The giant machines carry within them immense power, and the Pilots within them struggle with each other and with themselves—good and evil, war and peace, life and death, destruction and salvation—as the fate of Ord itself hangs in the balance.


This remarkably talented young author is a Transformers fanatic who grew up to be... well, he's pretty much still a Transformers fanatic, but he's evolved along with the genre and brings a more thoughtful voice than the typical mass paperback. It's been a privilege to edit the first two books, and I can't wait to see what happens in Book 3, set to drop in 2017.

Fun Fact: Chilling, wormy-mouth cover art is by the author's brother, Erik "DoA" Lonnquist, a world-famous eSports caster who lives in Korea. (Also notable: these ridiculously cool dudes are my nephews. I feel like my best shot at a little checkmark on Twitter is to change my handle to Aunt Joni.)