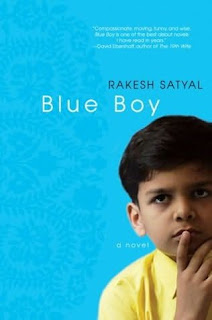 The recent suicide of an 8th grade boy here in Houston absolutely broke my heart. It is SO time for us to change this dynamic in our culture. I met Rakesh Satyal, an incredibly smart, thoughtful editor in NY a few months ago. Promptly went and bought, read and loved his beautiful debut novel. In response to the recent rash of suicides among LGBT youth, Rakesh is offering Blue Boy

Satyal, who won the Lambda Literary Award for Gay Debut Fiction this year, tells Advocate.com: “I really wanted to kind of put together this untold story, a gay Indian-American boy, but at the same time I wanted it to be universal in its pains. I think we’ve seen especially recently this sense that kids can feel isolated when they’re different in any way is one of the most persistent things about being a kid. The idea was to tell a particular story but make it universal and show, ‘Here is a resilience in kids that gives them a way of dealing with the harder things in life much more effectively in some cases than adults.’”

Twelve-year-old Kiran Sharma is into ballet...and his mom's makeup. And he believes he's the 10th reincarnation of Krishnaji, the blue-skinned Hindu deity and plans to announce this at the Martin Van Buren Elementary School talent show. As he's preparing his elaborate costume, flute solo and dance moves (with Whitney Houston backup), Kiran's skin begins to turn blue.

According to PW: "Satyal writes with a graceful ease, finding new humor in common awkward pre-teen moments and giving readers a delightful and lively young protagonist." And Fight Club author Chuck Palahniuk says, "The best fiction reminds us that humanity is much, much larger than our personal world, our own little reality. Blue Boy shows us a world too funny and sad and sweet to bebased on anything but the truth."

Suzan Harden said…
Screw the free download. I'll go buy his book because he did a very generous and brave thing.
10:51 PM