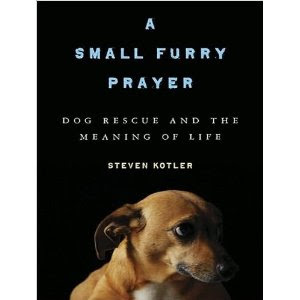 After reading Joni's comments yesterday on YOU HAD ME AT WOOF - a book I immediately ordered - I couldn't resist adding my own review of a recent read, A SMALL, FURRY PRAYER: DOG RESCUE AND THE MEANING OF LIFE.

Steven Kotler's tale of his move, with the woman he loved, from LA to the beautifully-wild but impoverished Chimayo, New Mexico, to give their rescue dogs the space they needed worked beautifully for me on several levels: as a memoir describing a man looking for authentic meaning in his life, as the compassionately-told story of the abused, abandoned, and unwanted dogs he and his wife have worked with, and as a thought-provoking call to re-examine our relationship with not only dogs but with animals in general. Kotler uses the story of his journey to explore a variety of fascinating topics from whether animals laugh to how both animal and mixed-species groups enter a state of flow to the use of hallucinogens by and homosexuality in the animal kingdom. There's a great deal to be learned from this fascinating and deeply-compassionate book.

I have to say, I didn't warm up to this book instantly. Though I love dogs and have adopted many rescues over the years, the couple's initial plan seemed so doomed, it was tough for me to relate to their decision to make the move. I was soon won over by the couple's courage and wisdom - and of course the dogs themselves.

Although I thought Kotler occasionally wandered off too far on the odd tangent, I nonetheless highly recommend this for anyone interested in a thought-provoking and moving exploration of the relationship between animals and humans. And there are a whole lot of truly amazing dog stories in there, too.