By Mylène March 16, 2011
Friends, this is cross-posted at Oil and Water, the blog for a recent anthology to raise money for the victims, human and otherwise, of the BP oil spill.  Thanks for sharing.

I've spent many years along the Gulf Coast, writing one of my novels in an old house that withstood the Great Galveston Hurricane of 1900, another in a weathered loft overlooking the island and the easy-backed water.  A third was set on the water itself, in a beach house.  I know the smells of the Gulf.  I know its gray and green waves, the birds that crash or tiptoe into it, the mullet that leap out of it, the tiny half-moon clams that burrow into the sand like ears going deep to listen.  I know the people who live along the water, who choose to be there because they like it, or because they work there, or because the salt simply gets into their blood.

And I know the oil rigs.  You can see the closest ones easily: they're black insects stuck on pins poised over the water.

I wrote "Butterfly" to express my dismay over the carelessness, the heedlessness that marks our species.  Taking something away from all the good things we do, we are neverendingly stupid and simple, greed tattooed onto the genome.  In "Butterfly," far away from the Gulf and yet still in Texas, a state attached to it, a vandal descends into one of the most beautiful caverns on earth to try to steal a creature millions of years in the making.  The parallels struck me as I wrote: the hunger for something to sell, the rashness of the cut, the speed, sloppiness, the willing accomplices, irreparable damage, running off.  Forgetfulness.  Forgetfulness. 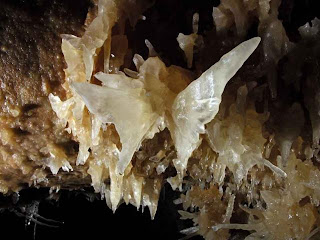 In "Butterfly," a nurse brings light down into the darkness.  That's the good part.  The side of us that heals, or tries to.  The side that can't undo but can tell the tale.  The storyteller.  I have a penchant for storytellers, as you might imagine.  The ones who don't forget, who'll repeat the same thing over and over again.  Here is where it happened.  Here.  Here.  Here.  The storyteller in "Butterfly" is a young tour guide and nursing student who took me down to see the one wing left of something beautiful.  She was no cool, literary observer, however.  When it came to the bastard who broke the back of beauty, she expressed a strong preference for breaking his legs.

Storytelling isn't passive.  It is one of the ways we have of tripping things up.

I hope you'll enjoy the storyteller of "Butterfly."  I can still see her, shining in anger, in mourning, deep in the earth, unbowed.

Kathryn Peterson said…
That last sentence alone is why I fall more in more in love with your writing every day, Mylene. You write REAL literary fiction.
11:56 AM

Barbara Sissel said…
So lovely and heartrending in its truth, Mylène. Breaking the back of beauty ... why can't we see?
8:57 AM