For the Love of Classics, Buy This Book: Anne of Green Gables 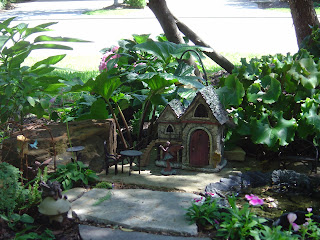 I was in the garden thinking about garden fairies (From the photo you can see why!) when I  remembered Anne Shirley and her love of fairies and her unshakable belief in them, how she would not be dissuaded. Not even by Marilla, who had been so certain that adopting Anne was a mistake, who cautioned Anne time and again that she was too talkative, too imaginative. But then, over time, Marilla fell in love with Anne. She became secretly pleased with her, this slim girl who had hair as flaming red as her flights of fancy. I tried to recall when my own conviction that fairies were true and real took root and decided that day, working in my garden, that I came into this world with that understanding, the same way Anne believed she did. I remembered that as a girl of around the same age as Anne, eleven or so when I read the children’s classic Anne of Green Gables by L. M. Montgomery

for the first time, I felt vindicated in my belief. I felt reassured. But not only because Anne stood up for the existence of fairies. In so many other ways too she was like most young girls, hunting a way to fit in, to belong, to be loved.

from my sister (copyright 1935). It belonged to my mother and her sister before us and loving the story is a family tradition. Reading it again, it has not lost its luster. The themes are timeless. Where does the child exist who does not waver in confidence? Who is not uncertain about their looks, whether or not they will belong, fit in? If they will have friends, a certain, particular friend, a bosom friend, a kindred spirit as Anne calls it. Who, no matter at any age, doesn’t long for understanding, a sympathetic ear? Where is the child who does not imagine at times they are somehow larger than the life they are living?

Anne questions why she must pray on her knees and why she must pray a certain arrangement of words. She speaks of praying out of doors, “in a great big field all alone”. She would there “just feel a prayer”. I loved that in her, that she felt so certain in her lack of convention about all things societal and religious, and yet she was so spiritually connected to earth and sky and to people. She was my kindred spirit, too, in her love of the garden and growing, blooming things and in her irrepressible joy regardless of her circumstances. She speaks of the “romance” of life. It seems lovely to speak of life in such terms, as a romance, as if you are in love with the mere fact and breath of living.

reminded me of the solace and delight I have always found in books, of the assurance that my own differences might be an asset. I found the reflection of my joy in life in her story and it has not diminished with time. The book is beautifully written and although it is of another era and possibly for some considered old fashioned, it is not. The wisdom is as true now as then and as truth will ever be. Always true.

Susan said…
I'm not sure which is more enchanting, the book review or the picture. Now you know why we build miniature gardens...
9:32 PM