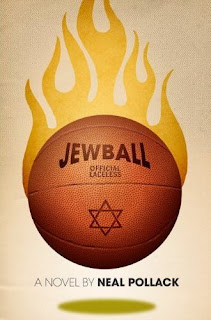 
For a writer like me, which is to say, most working writers — midcareer, midlist, middle-aged, more or less middlebrow, and somewhat Internet savvy — self-publishing seems to make a lot of sense at this point.


We have and will work closely thinking about editorial, packaging, selling foreign and other subsidiary rights, and strategizing online and traditional publicity and marketing. ...Though we are not doing a deal with a traditional publisher, large pieces of my job are the same.


From the bestselling satirist and memoirist Neal Pollack comes a funny, gritty noir portrait of a people on the brink and of a great American game coming into its own. 1937. As the world prepares for war and the Jews of Europe feel the tightening noose of Nazi oppression, tensions simmer in America. While thousands of homegrown Nazis gather in groups like the German-American Bund, American Jews organize against this scourge, resisting any way they can. Meanwhile, the game of basketball grows in popularity, and Jews rule the court. In Philadelphia, the greatest Jewish basketball team of all prepares to confront the Bund, fists cocked. Here, the Jews write the rules. This is war. This is sports. This is...Jewball.

Several years ago, Neal and I both contributed to The Worst Noel: Hellish Holiday Tales

, a personal essay anthology pubbed by HarperCollins (I'd done a memoir and a novel there), and I'm exactly where Neal is now: "midcareer, midlist, middle-aged, more or less middlebrow." I've written several bestsellers as a ghostwriter, and my agent will continue to rep me on those projects, but starting later this year, I'll begin pubbing my fiction on my own imprint, Stella Link Books. If print deals ensue, my agent will handle the segue to a brick publisher. I have no idea where the endeavor will go, but I'm thrilled at the idea of doing fiction over which I have total creative and financial control.

Footnote: The first title out from Stella Link will be the memoir I did at HarperCollins, Bald in the Land of Big Hair: A True Story

, which will launch the imprint this summer. The HC paperback is (astonishingly) still in print, and my editor there has been enthusiastically supportive of my epress venture. The smart publishers know it's to their own advantage to keep authors like Neal and me alive in the marketplace.

Kathryn Peterson said…
I totally agree about midlist, midcareer authors. And I even think that for some literary fiction writers, it might be the way to go. Actually, I've thought about publishing my short stories to Kindle shorts, provided that I work on them and craft them more. My feeling is that even if I were to place them in top literary magazines, I'd likely make nothing off of them, whereas at least if they were available via Kindle, I might get a little bit. That, and it would be so much easier to link to/put on a website, etc., provided that it didn't diminish my brand.

I think that's the biggest problem about self pubbing for new authors like me. We don't have an established track record, so there's no way for us to self pub ourselves above the slush.
7:39 PM

Kathryn Peterson said…
I'm curious also about how your agent feels about all this, Joni? I just wonder if at some point, agents roles will actually increase, because they will be more like managers and editors (those that are editorial agents).
7:40 PM

Mylène said…
LOVE the graphics and copy on the Stella Link site so far.
8:15 PM

Dr. KatPat, my agent is very supportive. She completely gets that this is the future for midlist authors.
9:19 PM

Colleen Thompson said…
Go, Neal, and go, Joni! I love that these new options are coming into play.
10:27 PM

Kathryn Peterson said…
I love the images too, Joni.
7:05 PM