By Colleen Thompson November 09, 2012
I've been asked a number of times about the differences between the two lines I've written for: Harlequin Intrigue and Harlequin Romantic Suspense.

As their senior editors, Denise Zaza (Intrigue) and Patience Bloom (HRS) tell prospective writers in their linked Q&A chat, the two lines are definitely not interchangeable.

In a nutshell, I'll summarize what they're saying, adding in some examples from my own experiences:

1. Intrigue is a bit shorter (65-70K), more focused on the criminal investigation/procedural aspect of crime solving, and extremely "hero-centric." The more alpha the male is, the better. The romance element is less predominant than the intrigue focus, sensuality may vary but must be fully integrated with the crime plot, and love scenes receive less emphasis, if they're in the book at all. (My most recent Intrigue, Relentless Protector, involves a very suspenseful hunt for the heroine's missing five-year-old, and I can tell you, she was *not* in the mood, though there is definitely a developing romance with the hunky ex-Army Ranger hero whose wartime experience contributed to her late husband's death.) One or both of the protagonists is usually (though not always) involved in a higher-risk career, i.e. police, special ops/other military, private investigator. And cowboy heroes are very popular, though there are certainly other (alpha, Alpha, ALPHA!) types. 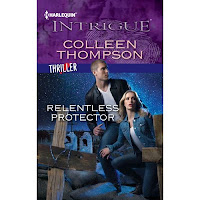 2. Harlequin Romantic Suspenses run from (70-75K) which gives more space to develop characters, including secondary characters. The character development, emotional/internal conflict, and developing romance receive more emphasis, though a suspenseful story is important, too. There's less emphasis on the procedural investigation and more on how events are impacting character growth/change, in my opinion. They love cowboys here, too, but there's perhaps a broader range of hero types, and family drama is very popular. (My November release, Passion to Protect, is the story of a wounded wilderness--hotshot--firefighter who's been carrying a torch for his first love, who married the wrong man. Battered but determined, she returns home, but is forced to rely on the hero to help her save her family from a devastating fire...and an even greater threat.) Can you see how these two stories differ?

A lot of these differences will ultimately boil down to the individual author's voice and storytelling emphasis. I started out writing Intrigues, which I still love, but my stories have gravitated more toward more emotional/family-oriented suspense, which has landed me squarely in Harlequin Romantic Suspense territory (which, I'll admit, is my favorite line to read. Don't tell! ;) By reading many examples from each line, you'll get a better feel for what the editors are looking for. And both are actively acquiring new authors, so best of luck to you!

Melissa Cutler said…
You broke it down so well, Colleen! When I was just starting out, I knew I gravitated toward reading Harlequin Romantic Suspense, but I wasn't sure what it was about it that attracted me. Turns out I love those emotional journeys you mentioned, as well as more emphasis on the heroine.

Thanks for laying it all out here. I'm bookmarking it to foward to my aspiring published writer friends who ask me this question occasionally.

Colleen Thompson said…
Thanks so much, Melissa! I hope it proves helpful.

Anonymous said…
Have a nice day to you. thanks for sharing
Visit me gif-ani.blogspot.com
1:03 AM