Why I'm supporting the Bald Ambition Kickstart (and I hope you will too!) 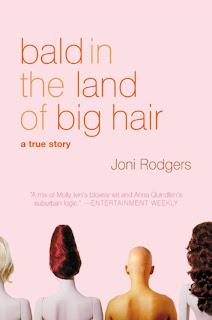 When my memoir, Bald in the Land of Big Hair, was originally published by Harper Collins in 2001, I never imagined that this funny little book by a nobody novelist would take on a quietly powerful life of its own. Over the years, BLBH has been condensed by Reader's Digest, excerpted in Good Housekeeping, translated and published around the world. In 2011, with the paperback still in print from HC, I independently released the 10th anniversary ebook edition with a forward from the wonderful Elizabeth Berg and an update on me and my family.

Now the hilarious and heart-wrenching one-woman show adaptation by actress Lisa Hamilton is headed for an off-Broadway debut. And she needs your help. Not a lot of help. Just a little. As she says in her Kickstarter video below, "I want your beer money." With just 3 days left in her Kickstarter campaign, $20 each from fewer than 100 people would get her to her goal.

Lisa Hamilton's script remains impeccably true to my original text. Impressed by her passion and in awe of her talent, I gave her permission to run with it. I've never asked for or received a dime from the production of this show. I'll receive no portion of donated funds and no royalties for the New York workshop production.

This book was never about money for me; it was about message.

That's why I released the ebook independently: I wanted to keep the price low, making it accessible to as many readers as possible. And that's why I'm pricing the 10th Anniversary Ebook Edition of Bald in the Land of Big Hair at $.99 on Kindle this weekend only: to draw attention to the final weekend of Lisa's Kickstarter campaign and thank everyone who's supported her by chipping in and spreading the word on Facebook, Twitter and beyond.

Seeing Lisa's show for the first time was one of three mind-blowing moments when I realized this book is no longer about me.

About five years ago, I received a long, heart-wrenching email from a Wall Street executive whose daughter, like me, was diagnosed with lymphoma as a young mom. He told me she'd read Bald in the Land of Big Hair and copied bits and quotes from it on Post-It notes that peppered her bathroom mirror, bulletin boards and refrigerator.

"She wanted to talk to me about what she was going through," he said, "but I wanted to keep up that damn stupid positive attitude."

Frustrated, she'd told him, "If you ever want to know, read this book."

She always took it with her when she checked into the hospital, so she had it with her that week, but she suddenly lost ground and slipped into unconsciousness. Her father took the book from her bag, pulled his chair close to her bed and read through the long last night of his daughter's life. Now it was morning. "They say it'll be another hour or two," he told me.

He said he felt compelled to email me because he'd missed his opportunity to talk to her, but now he felt as though he'd laughed and cried with her, that he'd shared in her journey, and that on some level, she knew it, because she knew he would eventually read the book. "Thank you," he said, "for giving me a way to reach her."

A few years later, I spoke at a large survivorship event and was signing books afterward. As I did my best to hug and listen to each person in the long line, a woman came forward with a hardcover first edition copy of BLBH, and opening to the title page, I saw that I had signed it ten years earlier: "To my sister in survivorship. Shalom and Joy, Joni Rodgers."

The binding was broken, the dust jacket tattered and coffee-stained, and leafing through the worn pages I could see that the well-worn book had been passed from that original reader to a sister, to a friend, to a daughter, to a book club mate, to a neighbor, to a chemo buddy, to one woman after another, and each of them had added notes and highlights in a host of different handwriting, pens and pencils. The book had become a conversation, two dozen voices chiming in love and support, sharing hopes and fears, giving in to the laughter and tears.

I'd launched this little paper sailboat a decade earlier. Readers were the wind and water that carried it literally around the world and back to me, and though it was a profound privilege to have in my hands again for that brief moment, I had to send it on its way. It didn't belong to me.

Seeing Lisa Hamilton's adaptation of BLBH, witnessing what it meant to that audience, I was stricken again with the realization that this isn't the story of me; it's the story of every person's inevitable crucible moment in life. Lisa's show takes it to that level, using my words to create an entirely new work of art, and everyone who sees it, each in his or her own way, will make it their own.

I hope you'll take a moment to watch this short video about the NYC workshop production and pony up that beer money, sending the story on its way.