Reading FEAR OF FLYING at 15 and 50 (Jong holds up beautifully.) 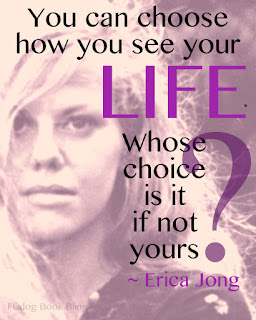 I first read FEAR OF FLYING in 1977. I was 15. My algebra teacher nicked it from my hand, threw it in the trash can and told me it was pornographic garbage, but I was already halfway through the book and smart enough to know that wasn't true. I rescued the book and spent a few weeks in detention, but it was well worth it. FEAR OF FLYING blew my tiny mind on several levels.

Because of the open discussion of sex in FEAR OF FLYING, some of the other important themes get back-burnered. For me, having been raised in the 1960s attending Wisconsin Synod Lutheran churches and schools that were dominated by German culture, the greatest impact of the book was how it made me rethink everything I'd been taught about Jews. (Unscrupulously greedy. Killed Jesus. Automatically going to Hell.) Here was the fresh antidote to the heartbreaking guilt of Anne Frank and Corrie ten Boom, along with an electric cattle prod of enlightenment for a child indoctrinated with the party line about how Jews caused the Holocaust by telling Pontius Pilate, "Let his blood be on us and our children!"

Erica Jong's brilliantly wry descriptions of her family, observations about psychoanalysis and running inner dialogue about desire, ambition, pleasure, displeasure, sanity, insanity and womanhood freed my mind in a way that every 15-year-old mind needs to be freed if the 50-year-old to come along later is to be anything close to happy.

Jong's wit and intellect profoundly impacted my understanding of literary craft, and I went on to consume everything else she wrote. My evolution as a reader serendipitously coincided with her evolution as a writer. I consider her body of work a major element in my education as an author.

So now I'm 50, and I just now finished rereading FEAR OF FLYING for the first time since I rescued that battered paperback from the trash. It holds up beautifully, despite the intervening years. The world has changed, but the human heart has not. It never has and never will, and that's what blew my tiny mind this time around. FEAR OF FLYING is a book that begs to be revisited and deserves a place in every enlightened woman's library.