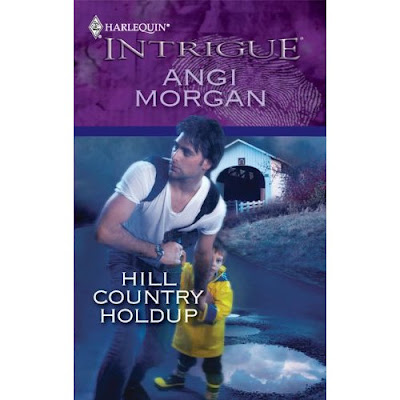 BtO: Hi, Angi, and welcome to Boxing the Octopus. When I first met you at the RWA national conference in Orlando in July, you had a smile that could be measured in megawatts - and no wonder, since you were a Golden Heart finalist whose manuscript had already sold and was scheduled for release. (For those who are unfamiliar, the Golden Heart is romance's most prestigious award for unpublished authors, given at the annual GH/RITA ceremony at the Romance Writers of America national convention. In terms of hoopla, it's the genre's Academy Awards event.)

So which came first, the contest final or the sale, and did one lead to the other? Did you have an agent to help you seal the deal?

AM: It’s a bit of a rollercoaster ride, but I’ll keep it brief... Signed with my agent on Oct 1st; won the chapter GH drawing (they pay for you to enter) on Oct 17th; waited until the last minute to enter the GH on Nov 9th; got THE CALL on Nov 12th; tried to withdraw (but it was confirmed I was eligible); signed a contract on Dec 1st; submitted the book, finished edits and proofs by Feb; then received notification that See Jane Run (now HCH) was a finalist in the GH at the end of March. And to make the rollercoaster ride just a bit more exciting, we sold .38 Caliber Cover-Up on May 28th.

I did have an agent, but I sent SJR to both the editor and agent after winning the Daphne du Maurier contest in 2009. My agent is directly responsible for the second sale and its early release date in February 2011.

BtO: How long had you been writing before this all unfolded? And what were some steps that aided your development as a writer?

AM: I’ve been reading and writing romance since Junior High. I joined RWA in 99, got involved in 2000. Through RWA I’ve met critique partners, utilized workshops, learned the craft of writing, volunteered, networked, made tons of contacts... But in 2009, I knew it was MY year. The kids were out of the house, I concentrated on me, my writing, and getting published. I was positive I would sell. I worked hard to get my manuscript in front of the right editor who loved it!

BtO: Love that winning attitude. And you’re right — sometimes it’s as if some internal switch is flipped, and we really do know.

Please tell us a little about your Sept. 14th debut, HILL COUNTRY HOLDUP, along with what's next for you.

AM: Oh, the back cover blurb is so much more exciting. LOL I like to say that HCH is a non-stop, action-packed, edge-of-your-seat heart-twister. It’s a fast read about a mother forced to commit a crime in order to save her son and the only man she can turn to that can help. A missing child. A mother on the run. And the man who saves them both.

BtO: Sounds like my kind of book, and I loved the excerpt from the buying page on Amazon! (See above link.) You've already got me hooked.

AM: I’m running a SNAP THE COVER contest. Details on my website: AngiMorgan.com Take a picture of yourself next to my store book display, send it to me and sign up for my newsletter. I’ll draw for prizes, but also display the pictures on my website.


Thanks so much, Angi, for stopping by BtO today. We wish you all the best with your first release and many more to come and encourage all of our readers to support a debut author by picking up a copy of HILL COUNTRY HOLDUP locally or online through our buying link!

Angi Morgan said…
Thanks for stopping by, Robin. I hope you lile Steve and Jane as much as I do.~~Angi
9:37 AM

Colleen Thompson said…
I'm so glad you stopped by, Angi! Just added Hill Country Holdup to my Kindle! Can't wait to read it.
10:36 AM

Man Candy Fans said…
What a great post. Angi, I loved seeing you with your husband on stage when you won the Golden Heart. Congratulations on all your success.
2:13 PM

Congrats on such a fantastic sale story! I'll keep an eye out for Hill County Hold-up. This Texas gal loves a story set in her home state!

Angi Morgan said…
Colleen --
Thank you! I've actually seen the book at a B&N and just sort of went speechless. This is such a cool time.

Angi Morgan said…
Colleen --
Thank you! I've actually seen the book at a B&N and just sort of went speechless. This is such a cool time.

Angi Morgan said…
Vicky,
I appreciate the good wishes. Tim finally admitted the other day that he'd been surprised. He was almost as stunned as me in the store yesterday.

Fortunately he didn't act out his first reaction on stage...which was to bend me back and plant a huge kiss on me. My mother would have been embarassed.

He refrained, telling himself: this is her night...they need to remember HER not me.

You know, sometimes, our guys really prove WHY we stay in love with them.

Angi Morgan said…
Vicky,
I appreciate the good wishes. Tim finally admitted the other day that he'd been surprised. He was almost as stunned as me in the store yesterday.

Fortunately he didn't act out his first reaction on stage...which was to bend me back and plant a huge kiss on me. My mother would have been embarassed.

He refrained, telling himself: this is her night...they need to remember HER not me.

You know, sometimes, our guys really prove WHY we stay in love with them.

Angi Morgan said…
Hey Kelsey!
YES PLEASE! And it is Texas...and so is .38 Caliber Cover-Up. Where HCH heads south, .38CCU heads north and hangs in Dallas.

Angi Morgan said…
Thanks for having me today, Colleen. I'm running several contests and anyone who comments on five of the blogs I'm hopping through this week (and sends me an email), will be entered in a drawing for some prizes.