A conversation with Joyce Hinnefeld

By Joni Rodgers December 07, 2010
Thanks to PR diva Libby Jordan for this interview with the wonderful Joyce Hinnefeld, author of the #1 Indie Next pick In Hovering Flight

and Stranger Here Below

, which is fresh out this fall. 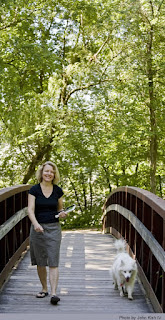 You've shared your inspiration for writing SHB on your blog...aside from being inspired...what important lesson(s) did you learn?
I think the most valuable lesson I learned has to do with the dangers of trying to write fiction that’s designed to “teach” its readers somehow. Call it pedagogical fiction maybe—or worse, pedantic fiction. This has to do with the problem of learning so much cool stuff through doing research and then feeling that it all has to show up in the book somehow. But it’s not that alone--at least, for me, in the case of writing Stranger Here Below. With this book I also had this burning mission, this sense that I had to somehow correct the historical record (There were all these people who had truly enlightened views on things like race and religion in backwoods Kentucky back in the nineteenth century! Meanwhile scholars at Harvard and the like were calling people from Appalachia “our contemporary Anglo-Saxon ancestors” and arguing that black people really did belong back in Africa! We need to learn about this, and understand our history better, so we don’t keep making the same mistakes!) Those sorts of things. I learned that preoccupations like these can really weigh a novel down.

If you weren't a writer (or a professor) what would you be?
A forester or an art historian. (Okay, in my deepest fantasies, I would be Patti Smith.)

What has your writing taught you about life?
To provide as simple and un-ironic an answer as possible, I think the practice of writing has taught me the value of deep absorption in something—in my case, a writing project—when it comes to my own mental health. I’m guessing that that level of absorption in, and devotion to, a project of any kind is always a boon to someone’s mental health.

What do you consider the greatest virtue in life?
Genuine empathy.

Who has been the greatest influence in your life and why?
Probably my parents, for both good and ill, I think. I do know that I inherited a sense of civility, and more profoundly, a sense of deep compassion, from them. On the other hand, I think I also inherited a kind of fearfulness, a tentativeness about myself and my place in the world.

Who has most influenced your writing?
Probably Gene Garber, a wonderful and incredibly imaginative writer who was my Ph.D. advisor at SUNY-Albany. His writing is nothing like mine; most of his work is wildly experimental. But he taught me to relish language, and also not to fear things like literary theory, science, philosophy. I won’t say he made me fearless in my own writing; I still have a long way to go in achieving that, I think. But he has demonstrated for me, over and over, that it’s possible to be both intellectually curious and deeply humane, as both a writer and a teacher.

Any thinking you feel comfortable sharing around your next book?
It always feels dangerous to say too much about a still pretty unformed project, but here’s what I will say: I’m in the early stages of another novel, one that will address various ways in which Americans view personal identity as completely malleable, as something that can be remade again and again. There will be some computer hacking and digital stalking. There will be an American woman who, as a young woman, has a relationship with a young man from Eastern Europe, and who eventually becomes a rather prominent scholar. And, right now at least, I believe there will be portions of the novel that are set somewhere in the West Indies.

And I think that’s all I should say right now.

Wendy said…
Love hearing from Joyce - especially about her next project which I will eagerly wait for, and then scoop up and immediately read!!

And I agree about the greatest virtue...if everyone had genuine empathy, just imagine the amazing world we would inhabit.
5:09 PM