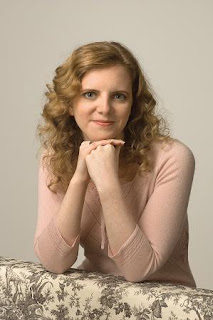 Let's face it: Lauren Willig is an overachiever. Her first historical romance, The Secret History of the Pink Carnation

, spans not one era but two, not to mention multiple continents, and launched a series that took Willig to the New York Times bestseller list. This Christmas, she's cozying up to readers with The Mischief of the Mistletoe

and still found time for 3Qs.

Lauren, thanks so much for joining us today. It must have blown the minds of a lot of people in your life when you abandoned your law practice to write historical romance novels. Was there a pivotal moment when you knew this was the right path for you?
Well… it was less of a surprise than it might have been. My story is an odd and topsy turvy one. I was one of those ridiculous people who knew from the age of six that I wanted to be a writer (who could resist the thrill of those crayon illustrations and construction paper covers?). I also knew, after a few early rejections and a college internship at a New York publishing house, that the odds of publication were roughly equivalent to those of winning the lottery. Starving in a garret for one’s art may be romantic, but it isn’t exactly comfortable. So I made the practical decision. I applied to law school.

Here’s where Fate steps in (with a loud snicker). Guess when I got my first book contract? My first month at Harvard Law. There I was, buried in torts and contracts, doing the whole Paper Chase thing, when I got that mythical Call, telling me that Dutton not only wanted to buy my first book (the manuscript that became The Secret History of the Pink Carnation), they wanted a second book as well. Everyone told me I was nuts. 1L year and a book? Nuh-uh. But with enough caffeine, anything is possible. I graduated from HLS magna cum laude with three books under my belt—and a permanent caffeine buzz.

All of this is a very roundabout way of saying that by the time I took a job as a litigator at a large New York law firm at the end of my 3L year, I already had three books out and another under contract. I’d made the decision to write under my own name (translation: I was too lazy to think up a catchy nom de plume), so people would slink into my office and hiss, “I saw your book in the partner’s office!” When I finally left, after a year and a half, the primary question I got was, “What took you so long?”

The major lesson I took away from this? You’d be surprised at how many lawyers secretly want to be writers....

Last spring, you taught a "Reading Historical Romance" class at Yale. What was the substance of the course and how did people respond to it?
Up until recently, any writing on romance novel fell into roughly three categories: (1) sociological studies, usually bemoaning the impact of these pernicious works on weak-minded women; (2) apologias by romance writers, defending the genre; or (3) highly practical how-to literature. Until Pamela Regis’ “A Natural History of the Romance Novel” there was very little material tackling romance novels as texts like any other, with their own tropes and traditions. Fortunately, the torch has been taken up by a team of talented academics, including Eric Selinger at DePaul and Sarah Frantz at Fayetteville, who have been doing their best to put romance scholarship on the academic map.

Last year, I had the great good fortune to meet Andrea DaRif (pen name: Cara Elliot) at Lady Jane’s Salon in New York. We got to chatting about our bright college years and bemoaning the fact that romance novels get so little attention in the academy. Andrea pointed out that there was a mystery novel class being taught at Yale, but nothing on romance. I had just come back from the annual meeting of the Popular Culture Association, which had included a workshop on teaching the romance novel as literature. We looked at one another and said, “What if?” and “Why not?”

Andrea and I realized that, as Regency romance writers, we had a unique opportunity to shape a class around that particular subgenre, using it as a microcosm through which one could effectively trace trends and developments. We opened the class with Austen’s Northanger Abbey, which tackles the seminal question of the relationship between novel and reader, moved from Austen to the mother of the Regency romance, Georgette Heyer, and from Heyer to Kathleen E Woodiwiss’ Flame and the Flower. Using Woodiwiss as our bridge to the American romance tradition, we examined “old school” writers McNaught and Lindsey before moving on to Kleypas, Quinn, James, and the more outré takes on the genre, including Regency gothic, Regency vampires, and Chick Lit.

The response was overwhelming. We had eighty applications for eighteen spots. The enthusiasm carried over into the classroom. Our students were thrilled to be working in a cutting edge scholarly field, knowing that they were writing papers on topics no-one had tackled before. Having taught before, in my grad school days, I was incredibly impressed by both the exuberant quality of class discussion (we often had to shoo them out after two hours!) and the high level of their written work. We had papers ranging from the Christological imagery in Chase’s Lord of Scoundrels to boxing as metaphor in Heyer’s Regency Buck. Their ingenuity and insights forever changed the way I look at several well-known texts.

And the legacy continues.... Just this past week, Andrea and I and three of our former students delivered a talk about the class to an audience of Yale professors. They may have come in skeptical about romance novels, but we’re pretty sure they left thinking about them in an entirely different way! 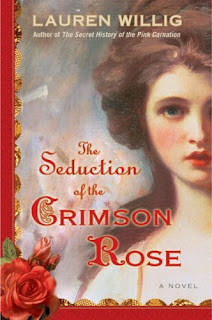 Two things: people and words. I’m endlessly fascinated by the intricacies of human nature—or, to put it with fewer frills, what makes people tick. Most of my writing is character driven. I like to challenge myself by taking characters who, on the surface, might seem difficult or unlikable, and delving into what goes on in their heads, why the behave the way they do. My fourth book, The Seduction of the Crimson Rose

, involved a heroine I like to call my “bitchy prom queen”, while my most recent, The Mischief of the Mistletoe

, stars a hero previously written off by other characters as a good-natured buffoon. In both cases, once we get into their viewpoints, the world looks like a very different place. Given all the fascinating characters out there, playing with different character types and viewpoints should keep me challenged for some time to come!

On top of that, there’s language. I love the sound of words, the feel of them, the flow of them. I love the challenge of finding just that perfect combination of words to describe a curl of the lip, a tilt of the chin, a change in the atmosphere. Done well, novel-writing can combine lyricism with practicality in a way that makes one think of grand tapestries, both functional and beautiful. Fifty years from now, I imagine I’ll still be questing after just that right combination of words.

Bonus question, if I may: What are you reading?
Right now, having just returned from two weeks of book tour (translation: I am zonked), I’m indulging myself by re-reading Jen Lancaster’s Bitter is the New Black : Confessions of a Condescending, Egomaniacal, Self-Centered Smartass,Or, Why You Should Never Carry A Prada Bag to the Unemployment Office

. I adore Lancaster’s memoirs, both for her strong narrative voice and her hysterically funny footnotes. It’s the perfect post book tour pick me up! (Plus, they’re set in Chicago, which I just visited on book tour—and where I had an absolutely amazing time.)