My publishing career as illustrated by my hair 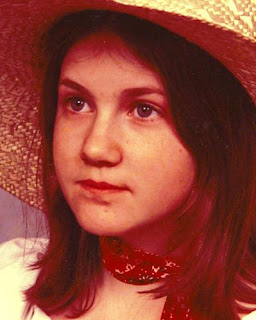 For $1/page, I wrote customized stories starring a classmate and her made-to-order crush. In cases where the crush was a real boy who failed to live up to expectations, a brief epilogue featuring his untimely death could be had for a quarter. Word spread, and I expanded my business to a local roller skating rink, passing off the folded pages in the privacy of the grimy girls' bathroom like a drug dealer.

On the first day of 9th grade, I was ironing my hair on the ironing board and branded a broad stripe down the front of my nose. This pretty much set the tone for my high school years. 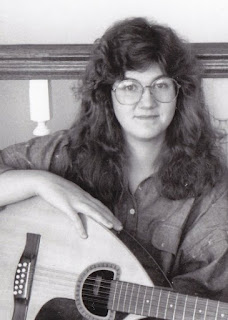 Here's me at the time I started writing my first novel, originally titled MacPeter's Midlife Crisis. I'd given up ironing my hair, and apparently, it was particularly humid the day this photo was taken.

In 1981, I was a late night DJ at a rock station in Helena, Montana, crazy in love with a brilliant but damaged Vietnam vet, and supplementing my income busking at bars and tourist attractions. The novel started as a script I intended to enter in a playwright competition. During my super-useful college career as a theatre major, part of my Stanislavsky acting training included writing character studies, and mine usually ran about 12 times the recommended length, spinning out elaborate backstory and imagining offstage scenes.

I was still reading a book a day, but had moved on to Tom Robbins, Irving Stone, Eudora Welty and all things Bronte. I worshiped authors, and it never occurred to me that I could have a book published. I was writing this story purely for the love of laying words in a row, and needless to say, it was about a late night DJ and the brilliant, damaged Vietnam vet with whom she was crazy in love. 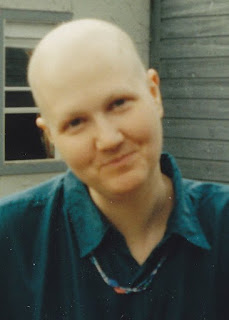 Here's me when I started writing my second novel, Sugarland

I was diagnosed with lymphoma in 1994, shortly after my husband and I moved to Houston with our two small children. After years of dabbling, I'd finished my first novel, now titled Last Chance Gulch, queried it to six dozen agents and publishers and collected six dozen rejections.

I had zero hope of ever being published, but in the crucible of chemo, I suddenly understood why I was writing: because I'm a writer. So I wrote.

I got my first book contract in 1996. Gary started shaving his head to be in solidarity with me during chemo. And no we're not on the same cricket team; the sweats were 3/$10 at Wallgreen's, and we were flat broke. And that's not a wig; my hair came back jet black and kinky a la Shaft. 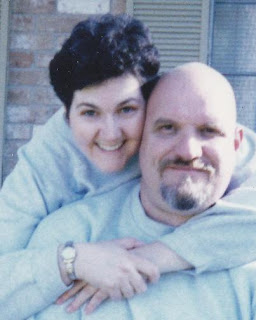 The amazing Fred Ramey (now at Unbridled Books) pulled my first novel from the slush pile, masterfully edited it from a 124K word swampland to a lean, mean 93K word fiction machine, and literally saved my life.

Fred gets the credit for the most fitting book title of my career: Crazy For Trying

While Crazy For Trying

was in the pipeline, I lost my remission and turned to adjunct therapies to supplement the chemo. Above my desk was posted Isaac Asimov's famous two-word answer to being asked what he would do if he knew he had one year to live: "Type faster!" 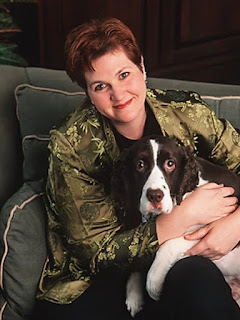 Here's me in Good Housekeeping Magazine in 2001, when they featured a Book Bonus excerpt from my memoir Bald in the Land of Big Hair

, which got my name on the bestseller lists for the first time.

My second batch of regrown hair was straight and mostly gray, so I was a different shade of red almost every month. I was also exploring my new publishing career, which was wide open, because I'd stumbled into it with no preconceptions, expectations or plans. And nothing to fall back on.

Marjorie Braman, my fabulous editor at HarperCollins, encouraged me to write a syndicated newspaper column while I got busy on another novel. That led to an advice column for a national magazine.

, which was pubbed by HarperCollins in 2006.

Ghostwriting was something I'd never really thought about until I started doing it, but these great stories came along, and I'm a writer, so I wrote them. And here's me today. I've done more than a dozen books, several of them NYT bestsellers, and worked with fantastic editors at five of the Big 6. I've learned that publishing, like personal style, is a process of constant reinvention, adaptation and a whole lotta get over yourself.

The decision to indie pub my backlist ebooks and forthcoming fiction has opened a thrilling new chapter. I'm not leaving traditional publishing behind. I plan to work hand in hand with my agent and transition my indie pubbed ebooks to print deals with standing houses. But I've grown up a lot. I've been to the puppet show and seen the strings, as they say. I began my writing career delivering stories directly into the hands of readers, so indie publishing feels like coming full circle. On roller skates.

I've given up trying to color my hair dark. The few strands that aren't white are bleached blonde to blend in. The only thing that hasn't changed is that daily longing to find the right words, the compulsion to set them down on paper. And so I write.