#BuyThisBook: "Happiness in a Storm" by Dr. Wendy Harpham (How I met the author and why the right book makes a powerful gift)

By Joni Rodgers November 30, 2010
I get a book in the mail almost every day. Publishers and PR firms have me on their lists as someone who reads alot, blurbs occasionally, blogs as often as possible, and is generally willing to do whatever I can to help other authors succeed. But yesterday I received a book from a friend. As a gift. It made me freshly sensitive to what a real gift is and why books make such potent and meaningful presents.

Backing up: In the spirit of "tis the season to sell, sell, sell", we're posting gift/book recommendations through the holidays. Today's book is...
Happiness in a Storm: Facing Illness and Embracing Life as a Healthy Survivor by Wendy Schlessel Harpham, MD
Recommended by Joni, who recommends it every chance she gets.
Perfect for anyone struggling with cancer or other serious illness in the family.

I first met Dr. Wendy Harpham in the pages of her second book, which was published at the very moment I needed it. The summer of 1995, I'd just finished several intense months of chemotherapy. I was physically and emotionally wrecked. My husband was shellshocked, my kids confused and frightened. I was emphatically NOT seeking out "cancer books", but Gary and I took the kids to Barnes & Noble every Friday night, where they could each select one book and then we all played Scrabble in the coffee shop. One night, we walked in, and I was confronted with a big ol' in-your-face FOS display of After Cancer: A Guide to Your New Life

, which had come out in hardcover the previous year and was enjoying a burst of trade paperback release PR.

My new life? Everyone around me was telling me it was time to get back to "normal", but I knew that was not possible. Having someone acknowledge this felt like a hit off an oxygen tank. I started reading the prologue and was weeping three pages in. As a young internist with a private practice, Dr. Harpham had been diagnosed with non-Hodgkin's lymphoma. She was 36. Her children were 2, 4, and 6. I'd been diagnosed with lymphoma at age 32. My kids were 5 and 7. This was the first contact I had with anyone who'd been down the same terrifying path. She knew. She got it. She got me. We were the same kind of mom, same brand of striver, but Wendy had reached a perspective I wasn't even close to grasping -- until I read this book.

Flash forward a year to my first paid speaking gig as a shiny new debut author. I was giving the closing keynote at a survivorship conference in Albuquerque. Speaking earlier in the day was bestselling author Dr. Wendy Harpham. She blew the doors off the place, as she always does, and afterward, I waited at the end of a long line to get her autograph. My throat closed as I handed her my dogeared copy of After Cancer. At the moment of truth, I couldn't put into words what this book had meant to me, how deeply, personally, tangibly it had helped me. I just babbled something tearful. Wendy signed the book, then linked her arm through mine as if she'd been waiting for me. "Walk," she said, and let me tell you, this woman walks with purpose. 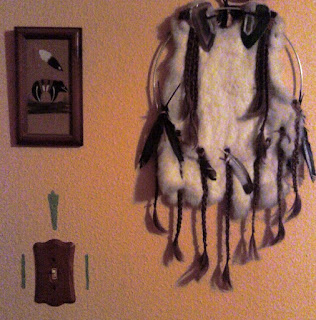 We hit the ladies room, then made for a line of buses that were taking conference attendees to dinner at a native American historical center, where we connected with our perfect third: Bernarda, a fabulous young medical student and fellow lymphomaniac. We laughed and chatted -- about cancer, of course, but more about life -- and each of us bought a little sand painting. Mine still hangs on the wall in my office next to a medicine wheel decorated with the long braids I cut off before chemo could take them from me. On the back of the sand painting is a gold sticker that says: "Navajo sandpainting is used by tribal medicine men as one of the traditional healing arts." Under that, Wendy and Bernarda signed their names, and Wendy (a stickler for details) wrote "October 5, 1996" along with Hebrew characters that translate to "kindred spirit". 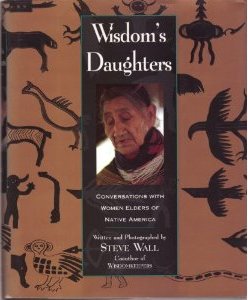 Flash forward to Monday. I received a book in the mail. Wisdom's Daughters: Conversations with Women Elders of Native America written and photographed by Steve Walls. The card attached said only "For my dear friend"; it didn't need to say more. The moment I saw the etched figures on the cover, I was transported to that moment when an author who'd profoundly influenced my thinking became a friend who's profoundly influenced my life.

Which brings me to why the perfect book is so much more than a placeholder present that says "I'm obligated to give you something so here's this waffle iron." A book is a gift. It's evocative. Transporting. It says "I saw this, and it made my heart full of you. Because I get you. And I always will."

Colleen Thompson said…
What a heartfelt tribute to a wonderful, strong woman with the kindness to reach out her hand. I'm so touched by your story.
8:58 AM

jeanna Thornton said…
Joni, your courage inspires and your words hold...
thank you for sharing your gift.
9:39 AM

Anonymous said…
That is a really touching story. More power to you both! Thanks for sharing.
10:08 AM