Dr. P. and Mrs. Evil: A prison student's take on Jekyll and Hyde--and me 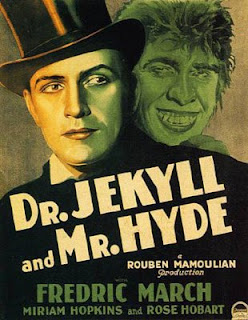 This semester, I've been using Dr. Jekyll and Mr. Hyde as a way to get my prison students to connect their backgrounds as behavioral science majors to the reading and analysis of literature. I've had all sorts of interesting responses to the novel, including this gem, from a student's homework. All the student had to do was write a one or two paragraph response to a question about duality, but this student decided to have some fun--and I loved it so much that I got his permission to post it here. Hopefully you'll love it too:

The meaning I perceived from Dr. Jekyll and Mr. Hyde is that there is always an opposite extreme to anything, whether it's a situation, an institution, or a personal characteristic. An alternative way of framing this work is described below, in the form of an example. The example shows that a person's level or extent of happiness that's expressed with a smiling face can certainly conceal the opposite extreme beneath it, and when given the opportunity to be exercised, this extreme will reveal itself.

For example: "Mrs. Dr. P. and Mrs. Evil," by J.S.
This situation recently occurred in room full of men convicted of an assortment of violent crimes. One little bitty, teeny tiny, kind, polite angel of a lady--whom we'll call Mrs. Dr. P.--spooked the heck out of them all to the point of paralysis, when she metamorphed into a monster. I was there! In my mind, I yelled "Oh my God! What the hell??? Who is that mad woman?"

Clenching our desks with sweaty palms, no one uttered a single word as she prowled through the aisles of the classroom, resembling a starving, rabid lioness in the midst of 16 delicious looking "innocent" baby antelopes. (That is exactly what we became. In one instant, the roles and labels in our lives were altered, from former hunters to the hunted. And we sat in total silence, eyeing the beast seeking to devour us.) Every guy just stared at one another, bewildered. Just as Utterson in Dr. Jekyll and Mr. Hyde beheld something "abnormal and misbegotten in the very essence of the creature that now faced" him, I entertained similar thoughts, when Mrs. Dr. P. revealed her dual personality, the evil incarnate Mrs. Hyde, also known as Mrs. Evil.

Mrs. Evil roamed to and fro, fists balled tight and eyes blazing. But no drinking of any elixir nor concoction was ever necessary to vanquish Mrs. Evil, because just as fast as she appeared, she disappeared. Then we were once again staring at the happy-go-lucky Mrs. Dr. P., who'd continued to teach as though nothing had ever happened. But it did happen, so it was too late. For we'd all witnessed Mrs. Evil, and those flaming eyes would forever be seared into our memories. Moments passed, and everyone still sat stunned, believing their eyes had deceived them. What triggered Mrs. Evil's abrupt appearance and departure? It was a photo of a frenemy, in a magazine. I now know that "hell truly hath no fury like a woman scorned." My eyes have seen the coming of the wrath of the Lord. Mrs. Dr. P.'s opposite, Mrs. Evil, became the shining epitome of that wrath.

(For fear of his safety from Mrs. Evil, the original observer has fled into the mountains of Europe and remains secluded inside of a cave, now living as a hermit. Before fleeing, the original observer gave the author consent to write this story of his experience in the first person narrative. Also, all names appearing in this work have been changed to protect the identity of Mrs. Dr. P./Mrs. Evil, and for the author's own safety against her--if you'd have seen Mrs, Evil's eyes ablaze, you'd do so too!)

Joni Rodgers said…
Clearly, we need to get Dr. KatPat liquored up so we can hear the backstory on this...
8:31 PM