Ever get that feeling you're being watched? (A conversation with "Panopticon" author David Bajo) 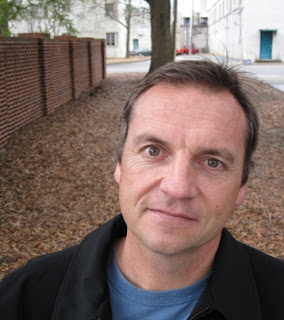 , which is now in bookstores (deftly sucking readers' heads inside out.)

David, thanks for stopping by. What inspired this novel? Did you find it alarming when what you'd written about seemed to be becoming reality?
As a journalist, I was assigned to cover a group in southern California called Border Witness. What they did was host field trips to crossing hotspots along the Tijuana Riverbed. The group’s idea was to sit and watch as a collective the riverbed, the gathering of potential immigrants on the Mexican side, and the Border Patrol sentinels in their trucks on the US side. Everyone could see each other. With camera, I was embedded in the Border Witness group, about twenty of us positioned along a tiered embankment. Mexicans were popping through a seam in the metal wall and finding perches along the opposite bank. There was even a little food vendor near that seam, doing a tidy business. One Border Patrol truck and one Border Patrol holding van were parked on overlooks. We could hear the scrabble of their radios.

Everyone’s action was accountable. We were in a panopticon. My camera, my recognized presence as press, amplified the panopticism because it projected that accountability to a much larger audience (the city of San Diego) and over a much longer time span (the story and photos could be around forever).

As a journalist, I had to remove myself as subject and could not write about that strange, abstracted weight my camera had. But as a novelist I had to. What I wrote about in Panopticon—-people being spied upon through laptop cameras, security systems, border surveillance, disguised lenses, etc.—-already existed as an extensive part of our reality; we just didn’t notice it, grasp it. As a society, we seem to want to deny or ignore the extensiveness of it, even while partaking of it, until it directly effects us emotionally, until we see a group of innocent Pennsylvania high school students get spied on in their bedrooms through school-issued laptops. We become even more outraged when we discover that the school acted legally. I didn’t predict anything; I just wondered when we would all begin to notice.

What role do you think fiction serves now in terms of cultural commentary?
I think novels and short stories allow us to comprehensively approach the most pertinent aspects of contemporary cultural, to emotionally, psychologically, and aesthetically sift through the nuance by piquing and tweaking our imaginations. That general process is achieved best through the written word—words on surface—because reading is the most open and flexible route between the collective and individual imaginations.

Is the love affair in the novel intended to show people still matter, that real relationships still matter?
I think it’s more of an imperfect inversion of that idea; without a sense of the panopticon, without panopticism, we don’t matter. I certainly wanted to test intimacy within the panopticon and I knew a love affair would allow me to explore that and to make that exploration universal and sympathetic. By making it an emerging affair between two very different individuals, with their own unique takes on urban voyeurism, I knew I could tilt the balance of intimacy back and forth between Rita and Klinsman, never letting it become equal, always keeping it dynamic.

What's next?
I’m thinking a lot about William James’ essay “The Hidden Self,” and I’ve found a very entertaining way for me to consider it in light of our contemporary culture. I will probably compose that way as a novel, as something for others to see, but right now it’s just for me to play and work with. Fashioning things into stories has always been for me the best path toward understanding. Even immediate events automatically turn into stories within me; this probably makes me slow. When I was a kid I thought I might be crazy because I thought this way. Then I read an interview in Time where John Irving admitted he would drift out of lively conversations, spinning them into stories inside his head instead of listening to and reacting to what was actually being said. The picture on the magazine cover made him look reasonably sane, so I felt a little better about things in general.

Read an excerpt from Panopticon