Reworking the "Rules" of Magic and Literature: Alexi Zentner on his Novel Touch 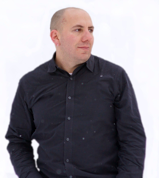 This February, I was delighted to meet several debut novelists at the Association for Writers and Writing Programs conference--among them, Alexi Zentner, whose elegiac and magical novel Touch officially debuts today. The novel has already received quite a bit of advance buzz, drawing praise from a wide range of writers, including Mary Lawson, Tea Obreht, and Lauren Groff. Today we welcome Alexi and congratulate him on the early success of Touch.

I was very excited to meet you at AWP and even more thrilled to hear about Touch. What can you tell us about the novel? It seems a very fresh concept, and I love how one reviewer brought up "The Brothers Grimm." What other kinds of images are in the book?

Touch is set in the fictional town of Sawgamet, a north-woods boomtown gone bust, where the cold of winter breaks the glass of the schoolhouse thermometer and the river freezes so fast it can trap the drowning. Stephen, a pastor, has brought his family home on the eve of his mother's death, thirty years after the mythic summer his grandfather returned in to raise his beloved wife from the dead. While the book has been called "haunting" and "eerie and elegiac," and Lauren Groff compared it to The Brothers Grimm saying Touch had a "sinister magic," for me, the book is, at its core, a love story. It's about the grandfather - who walked across the country, stole a dog from a witch, and then founded the town of Sawgamet - and his inability to let go of the woman he loves even though she is in the grave, and it's about Stephen and his own memories.

While the story is told in this incredibly harsh landscape, where I have the supernatural bumping against human heartbreak and loss, Touch is actually a really hopeful book. The monsters and myths in the story are sometimes one and the same, sometimes scary and sometimes simply part of Sawgamet. There are monsters like a dead man who won't stay dead, qallupilluit, wehtiko, mahaha, and then the wrath of the woods. But at the same time, there are also things that in another time and place might be miracles: a golden caribou, a river of water as sweet as syrup, trees that braid themselves together in love.

Your work has drawn comparison to Gabriel Garcia Marquez and other magical realists, yet you resist the term magical realism when describing your work. Can you tell us a little about what you're doing with the literary form here, how you're reinventing and reinterpreting the mystical for a different culture and era?

As much as I admire Gabriel Garcia Marquez - and reading his work was one of those moments in my life as a reader that changed everything - and other writers of magical realism, I've been using the term mythical realism because I am, I hope, doing something new and different. It might seem like I'm parsing a term, but the forms of magical realism - whether the central and south American versions or the European versions - are rooted firmly in their own place and traditions, and I think that taking those frameworks and just mapping them over our own landscape is problematic. When you do that, you end up with a palimpsest, where the ghostly traces of what you have borrowed always show through your own writing. You can create terrific work that way, but I was born and raised in Canada by American parents, and I've lived in the USA since college, so my own history dictates that I take a sort of oblique angle in terms of the way I look at my own cultures: by reworking national mythologies, I am, I hope, creating new work.

One of the things I've tried to do is weave the story in Touch with these myths so that the myths and magic are treated with the weight of reality, becoming an ongoing part of the characters' lives as opposed to single, solitary parlor tricks that are sprinkled through without purpose other than to raise amazement. Although, of course, I also hope to raise amazement. I should say, by the way, that I think there are a number of authors - my contemporaries - who are doing this, who are writing work that I'd call mythical realism, who are reworking the "rules" of magic and literature, even if they aren't calling it as such.

Can you tell us a little bit about how you came up with the ideas for the trailer, and what echoes of the book are present there? And how important is it for writers to develop a trailer for their books? 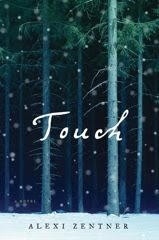 I'm not sure that it's particularly important for writers to make trailers for readers. I personally tend to dislike book trailers: I'm a reader. But it's just another way to give people access to your novel, and I thought it wouldn't hurt, particularly if I could make a good trailer. We all write our books with the hope that they will get read, and if a trailer will help get the book read, that's great. I'm honestly not sure how much it has helped though. I've gotten a lot of compliments from people about the trailer, but I have a sneaking suspicion that it's mostly been watched by people who would have bought the book anyway. I actually have two trailers: one that I made myself, which is what we are talking about, and another one put together by Knopf Canada that features author Mary Lawson talking about Touch and the Knopf New Face of Fiction program.

The trailer with Mary Lawson is a more traditional "talking head" version, and it's lovely and a great endorsement for the book, but not everybody can call up a bestselling author who was in the running for the Man Booker and get them to praise their book in a video, and I didn't actually know it was in the works. I made my trailer ages ago, before I knew about the Mary Lawson one, and I decided ahead of time that I wasn't going to try to capture a literal rendering of the book, nor did I want to sit on my couch and talk about how awesome I am. My budget was zero, and because I wasn't sure about the efficacy of trailers, I didn't want to spend a ton of time on it, so I decided that I would just try to capture the mood of the book. Honestly, the video was just pure luck: there was this incredibly swooping, mass of birds circling the trees in a mesmerizing and terrifying pattern over the purpling sky, and I was able to get my phone out and record it. A little bit of time on iMovie and I slowed it down, played with the color a little, and put some of my blurbs on the screen.

I've been incredibly fortunate with my blurbs. I'd gotten several blurbs on my own - Tea Obreht, Lauren Groff, Philipp Meyer, Aryn Kyle, J. Robert Lennon, Josh Weil - and have since gotten even more from my publishers - Linden MacIntyre, Johanna Skibsrud, Beth Powning, and Chloe Aridjis - to the point where it is an embarrassment of riches, and with them all up at my website, plus starred reviews from Publishers Weekly and Quill & Quire, even I am starting to believe the book is good. But the hardest part with the trailer was the music. Again, I was really lucky. I was a waiter at Bread Loaf with an amazing musician, Alicia Jo Rabins, who was willing to let me use a song from her band, Girls In Trouble that I thought really spoke to the tone and mood I was going for. I do think, overall, the trailer captures some of the tone of the book. I hope. But when all is said and done, I don't think trailers are essential. I wouldn't recommend doing one unless you can do a good one, but I also don't think writers should spend much - or any - money on developing them. I guess the question writers should ask themselves is, would I watch it?

Thanks so much for your time. Now, standard BtO bonus question: What book(s) are you currently reading? And are you a one book at a time reader, or do you read several at once?

I'm currently reading The Beginners, by Rebecca Wolff (June 2011, Riverhead). I've got a daughter in first grade and another one in third grade, and I can't quite handle reading more than one book at a time right now.

Kathryn Peterson said…
Thanks again for stopping by, Alexi. You're doing such important work.
10:52 PM

bilgi bankası said…
This comment has been removed by the author.
6:05 AM

Barbara Sissel said…
Kathryn, this book sounds so intriguing. Can't wait to read it. Thank you for sharing this and the video Alexi did ... it was gorgeous and haunting....
2:50 PM