A Beautiful Jewel of a Gift for the Reader 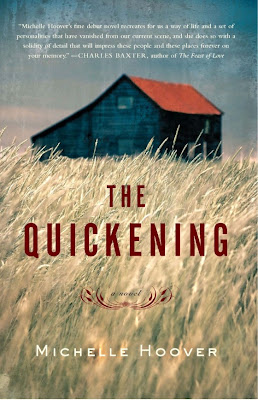 THE QUICKENING, Michelle Hoover’s fiercely rendered, Depression-era, debut novel is a treasure on every level. The title is so well chosen in its promise of volatility; its suggestion of things both perilous and miraculous; some kind of upheaval, the possibility of ruin. In the case of Enidina Current and Mary Morrow, the true peril that binds them is found in their silences, the things they don’t say, but only feel and think about one another. The women have little in common despite shared lives on neighboring hardscrabble farms in the upper Midwest. They’re forced together more through isolation than anything else and have little understanding of one another. Enidina isn’t beautiful; she’s big and works as hard as her husband Frank. Mary is fine-boned, delicate and lovely and harbors an awful secret. The women’s reliance on one other is borne of necessity and the drive for self-preservation, but the delicate balance of friendship they manage to achieve is riddled with threat from the elements and from government regulations and from the power of their own desires and emotions. In THE QUICKENING Hoover has created an entire world that is evocative and compelling and hard to leave behind. The novel shares a sensibility with Jane Smiley’s A Thousand Acres in both setting and mood, the complexity of character and the lovely flow of its language. It’s an absolutely riveting read and I highly recommend it.