Social networking for the antisocial 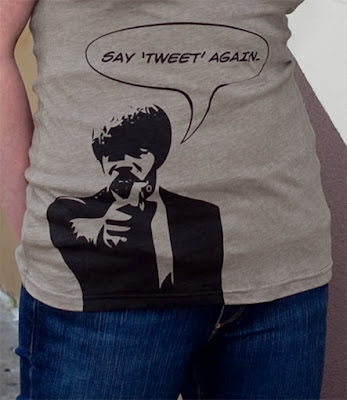 People keep pushing this whole agenda of auto-tweeting as a way to game the Amazon ranks, and I know it works. You do sell books, but... do you still have time to write books? (Do you still have a soul?) I get that twitter is about "building relationships," I'm just not clear on the quality of a relationship based on spam.

My thought all along has been to use twitter with a less aggressive stance, using hashtags to insert my two cents into a conversation that actually interests me.

For women in the 60s, life began at #contraception. BT Sissel on the bad old #aspirin days. http://bit.ly/xctmgF

I've been assured that this is pointless. But I remain hopeful that "teachable moment" marketing that links the right message with the right moment has an effect that is perhaps less obviously and instantly measurable but ultimately more powerful, because it's about building a culture instead of a terribly impressive house of cards.

Twitter is an insanely great idea, and it's a powerful marketing tool, but it requires a certain personality type, and I'm not sure that's me. Does that mean I won't sell books? Maybe. I'm sure it means I won't sell as many. And at the end of the day, authors want to put their books in readers' hands.

So I'm determined to give it a shot.

I'll start by implementing this list of 5 Twitter Secrets to Become Highly Visible in Your Niche, one each day this week. Next, I'll take a crash course in Book Marketing 101 from World Lit Cafe founder, Melissa Foster.

Just in case, I bought the T-shirt.