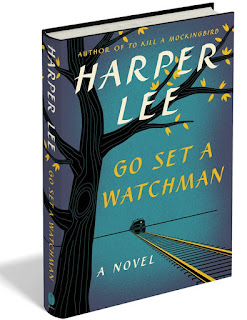 I loved it, for starters. I think what the book says about life and racism is profound, and what it says about the publishing industry is a serious kick in the head.

WATCHMAN is about growing up, "killing the Buddha" and laying claim to one's own world view. It's about the danger of holding on to our innocence for too long, and the author brings that meaning boldly home with a simultaneously hilarious and heartbreaking parable about how her ignorance about the facts of life almost results in her untimely death.

I can certainly believe the story that this is Harper Lee's first novel, and I believe assertions that it wasn't heavily edited, because frankly, there are some passages that gave me red pen DTs. Some of the monologues run on like a Rand Paul rally. I totally understand why the editor buried it and encouraged her to bend her considerable talent to the concept of MOCKINGBIRD, latching onto a fairly insignificant anecdote and reframing it as the main plot thrust -- which also neatly swapped the dynamics of the two main characters, making the star of the book a man instead of a young woman.

It made the novel about race relations instead of the smaller, quieter conflict between father and daughter. It set up very clear villains and heroes, clear good and evils, where WATCHMAN leads us into a humid southern swamp of human frailty and beauty, stereotypes sinking beneath the surface. In this respect, I think WATCHMAN actually stands above MOCKINGBIRD in a way many Southerners will love and many New Yorkers will never understand. The great challenge in WATCHMAN will be for readers in our enlightened {{cough}} world to accept and love an idol with feet of clay or to see that clay is not the same thing as shit.

There's been a lot of knee-jerk reactions to the racist rhetoric that comes out of Atticus, sharply contrasting with the high-minded monologues in MOCKINGBIRD. But it's worth noting that Harper Lee's original southern hick jury in WATCHMAN found Tom Robinson (the black man unjustly accused of rape) not guilty, where the southern hick jury in MOCKINGBIRD found him guilty -- and that's a major plot point. New York has its ideas about what the South is and who Southerners are, and MOCKINGBIRD facilitates those stereotypes while WATCHMAN explores the true nature of the southern -- and human -- heart.

Also worth noting: Atticus's father fought for the south in the Civil War. Is it not possible for people to cringe at the racist legacy clearly imprinted on him and still give him credit for a giant leap forward in ideology? And then can't we celebrate the additional leap forward for Scout without condemning him? Because he made her the woman she became. That's our job as parents: to raise up an exponentially better generation who will improve on the world while raising up an exponentially better generation to replace themselves.

And if you think we moderns are the paragons of enlightenment and virtue, then let's pause the racism conversation for a minute and talk about what the book says about sexism. The civil rights movement is in full swing in WATCHMAN. The "Women's Lib" movement is not even on the horizon. We still have a long way to go, baby, especially in the publishing biz.

Setting aside the suspicious circumstances of the magical appearance of WATCHMAN (and the buckets of money involved for the publisher and agent), I also totally get why Harper Lee might want us to have this novel now, at this point in her life. She is now where old Atticus is in WATCHMAN: an elderly person who is sick and tired of carrying the burden of our hero worship. And perhaps sick and tired of seeing Atticus deified as an icon of egalitarianism. She takes our Gregory Peck daddy figure from us the same way he was taken away from Scout. So there. Take that. Eat your disillusionment and throw up behind the ice cream parlor that was once your childhood home. It hurts, and it infuriates, and it strips away your security blanket. Get over it. Because only when you get past that are you able to know and love the truly told, deeply dimensional human beings in this book.

As an editor, I want to go back in time, embrace this young author, force her to firmly look in my eyes, and tell her: "This is a wonderful book. And you must write another one and another and another, and every one of them should say exactly what you want to say." Yes, I love MOCKINGBIRD as much as the next book nerd, but this breaks my heart: No matter what we know/don't know about the publishing process, the bottom line is that the publisher took hold of a young woman who had astonishing lyrical skills, massive raw talent, insight that transcended her years, and literary chops that set her on a trajectory to eclipse Faulkner, and they turned her into a one-hit wonder recluse who was unwilling or unable to endure publishing another book for 50 years.

I love both Harper Lee's beautiful novels. I'm mourning for the dozen or so she could have and should have written.

Colleen Thompson said…
Thanks for the very thoughtful review. I'd been on the fence, but now I'll be putting it on my reading list!
5:39 PM

Lynne Foster Shifriss said…
Great review! Now I really am not going to get anything else done tonight; got GSAW on my kindle!
7:40 PM

Joni Rodgers said…
Thanks, Colleen and Lynne. Let me know what you think of the book!
9:42 PM