How to love a bald woman, especially if that woman is yourself 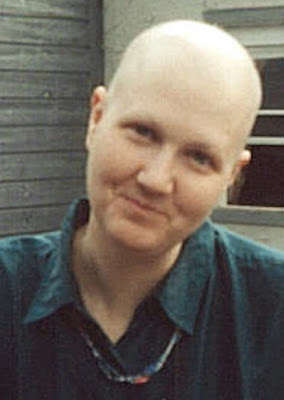 The bald girl flashpoint at this year's Oscars stirred up memories of what it felt like to be a bald girl in the Big Hair Capital of America.
Big hair in Texas gives bees beehive envy. It’s prerequisite for a real estate license, a symbol of potent femininity and sensual largess. If people are willing to sit behind you in a movie theater, you’re just not doing it right.
I was 32, a working mom living in Houston, when I was diagnosed with non-Hodgkin’s lymphoma, a potentially lethal blood cancer. A few weeks into the aggressive chemo, I wasn’t just bald, I was salamander. No eyebrows. No eyelashes. No, um…etcetera. I’m not sure I still qualified as a mammal. Even if I could have found a wig that didn’t make me look like Betty Rubble, the summer heat in Houston made wigs, hats, and turbans unbearable.
If I went out with my head uncovered, people called me “sir.” They stared. They snickered. They judged, because it’s human nature to judge first and ask questions later. During a break at my chi gong class one night, I bent down to get a drink from a water fountain, and when I stood up, the young man in line behind me was visibly startled. He glanced down at the floor and then crossed to the other side of the gym to drink from a different water fountain.
For most women, involuntary baldness is a painful experience. This isn’t about vanity; it’s about isolation, separation, and nonsensical cultural bias. My main problem wasn’t the abnormal situation on top of my head; it was the toxic assumptions in the heads of people around me. For me, baldness was the manifestation of the inward exile I’d felt as an awkwardly tall, utterly flat-chested, bisexual girl in a bitchily insular fundamentalist Christian high school. Now my true freak status was out there for all to see. And it was weirdly liberating.
At the moment I was faced with my own mortality, baldness freed me to live in my own skin, finally accepting myself as I am because this is the only self available to me in this lifetime; I can either rock it or die trying to be someone else. I became addicted to the clean, comfortable feeling of baldness, because I liked the feeling of an unabridged me.
My hair grew back after a couple years, but it still gets thin and patchy when I’m sick or stressed, so I’ve buzzed it off many times for practical reasons or just because I felt like it. People used to say how “brave” it was for me to be openly bald. And now they say how “brave” it is for me to not color my gray hair. The subtext of both these backhanded compliments is a reminder that I’m not the woman the world says I’m supposed to be. And I’m cool with that. 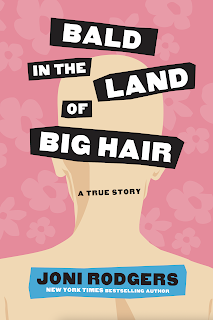 I’ve been praised for having a sense of humor about it all in my memoir Bald in the Land of Big Hair (HarperCollins 2001), but when late night comics held up Britney Spears shaving her head as evidence of her mental instability, I wasn’t laughing. And I didn’t laugh at Chris Rock’s “G.I. Jane” joke at the Oscars. It was a cheap laugh at the expense of Jada Pinkett Smith, who’s spoken openly about her alopecia. But more offensive than the joke itself was the response of Jada’s husband, Will Smith, who strode up to the stage and gave Chris Rock a swift slap upside the head.
It was inexcusable that the show’s producers allowed Smith to remain in the theater. And then presented him with a prestigious award. And then let him blather on about “protecting” his wife, who strikes me as a person who's capable of defending herself. Frankly, his reaction showed how sensitive he is to her baldness, like it’s a handicap or a disease or a “we don’t talk about Bruno” type mortification to the family.
When I was bald, my husband didn’t “protect” me by acting like a jackass or trying to take ownership of my pain. He stood up for me by shaving his own head in solidarity.
If you really want to support a woman who’s bald, respect her for having the courage to be herself. Show her you don’t fear contagion or distrust her sanity. And be grateful, because that beautiful bald head signals how welcome you are to be your own unique self when you’re around her.
Peace and grooviness to all.
jr
Bald in the Land of Big Hair chemotherapy Jada Pinkett Smith memoir oscars will smith

Coming Attractions and Burning Questions: What Do You Want to Hear?

Since I'm new to the blog, I thought I'd turn the tables and ask what you're struggling with about writing. What are some questions you have? Today I sat and brainstormed possible topics for my part of the blog, and thought I'd let you help me narrow them down. Here are just a few titles of possible blogs. Which ones would you be most interested in? And what else are you grappling with right now ? Possible Blogs: On Craft: Characterizing from the inside out: Why I heart Laurie Halse Anderson 3 Things genre writers can learn from literary fiction (and vice-versa) First Chapters: What We Risk When We Put it All Up Front Why Violence Can Be Boring--and How to Handle it So it's Not On The Writing Life: Balance and the Writer's Life: Is it Possible to be a writer and remain sane, social and healthy? What We Give Up to Write--and What We Shouldn't Best day (or night) jobs for writers If I ever make it, I still want to be nice "A C 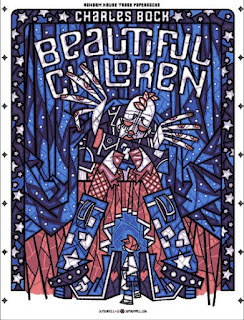 Author Charles Bock has some amazing friends in the the litrasphere. According to Jacket Copy , Leigh Newman, Mary-Beth Hughes and Fiona Maazel have enlisted the help of Mary Gaitskill, Richard Price, Gary Shteyngart, Josh Ferris, Jonathan Safran Foer and Jonathan Franzen and are throwing "The World's Most Literary Rent Party Ever" to benefit Bock and his wife, who was diagnosed with cancer shortly after the publication of his debut novel, Beautiful Children . Mary Gaitskill and Jim Shepard will read at the event. Notable authors including A.M. Homes and Susan Cheever will dispense "unprofessional guidance" at a literary advice booth. Silent auction items include literary dog walking by Amy Hempel, a key lime pie made by Josh Ferris, an evening of "hot dogs and shameless flattery" with Gary Shteyngart, and a (less inspired but more Ebayable) signed book from Franzen. Quoting Leigh Newman: "Charles is a magnificent, generous, talented person,