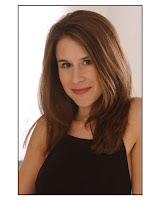 Stepping out with a lovely debut novel, Allison Winn Scotch takes a moment to chat about writing, life, and The Department of Lost and Found, which PW calls "a bonbon of a book."

Allison, I know from experience that a book with cancer in it often gets tagged as "a cancer book", but The Department of Lost and Found is really a book about life, isn't it?
It’s funny: on the surface, The Department is a book about a young woman who gets cancer, but to me – and to many readers, so I’ve been told – it’s about much more than that – it’s about a young woman who is trying to figure out her life, what’s important, what’s not, what her purpose is, whom she loves…all of those big questions that so many of us wrestle with as we forge our way to adulthood. And certainly, as I was crafting Natalie’s story, a lot of my own experience rattled around in my mind. For example, Natalie decides, as part of her quest for self-awareness, to track down the five loves of her life and ask them what went wrong. And while, um yeah, I’ve never specifically tracked down my exes, I have thought long and hard about those relationships – sometimes I still do – and have tried to grow from those experiences and reflect on how they helped make me into who I am today.

In the book, Natalie unpeels her life, much like an onion, until she sheds all of the layers that protected her from who she really is and who she needs to become. And I think a lot of us can relate to that – I tried on several career hats until I found my groove as a writer – and I’d hope, like Natalie in the book, that just because we make a wealth of mistakes, that this doesn’t mean that we can’t correct our course or be granted eventual happiness. That’s the beauty of life, and of, I hope, this book.

Where did the story come from?
I lost someone close to me to cancer, and that was definitely the emotional spark for the book, but from there, I took it and created fiction. I wanted to write about a character whose life was in total disarray and who had to be turned on her head in order for her to find a way to right herself. In the book, cancer is just a catalyst for her “aha moment,” much like we’ve all had – that low point maybe after a break-up or after we’ve lost a job or whatever – when we’ve had to dig a little deeper and find a way to nudge our way out of the crap pile that life has heaved on us.

Let's talk about process. Do you outline or wing it?
No outline. I’m a fly-by-the-seat-of-my-pants type of gal, both in life and in writing. I tend to jot down upcoming scenes about two or three chapters ahead, so, for example, as I wind up one chapter, I’ll write down major plot points for the next few – a scene with a boyfriend, a problem at work – and then I keep doing this over and over again until I’ve written the whole book. This method gives me the freedom to change the plots and the characters as needed, taking them down organic and honest paths, but also gives me momentum for the next day of writing: I don’t open up the document with no idea where I’m headed, which can be really daunting for me and causes me to procrastinate indefinitely.

Any advice for noobs out there?
It’s okay to fail at it. I don’t know if anyone specifically told me this, though I’m sure that I’ve read anecdotal advice that says something similar, but it’s certainly something I’ve learned along the way. My first book was decent enough to get me an agent but not good enough to sell, and in retrospect, that was such a blessing because, man, I read it now, and it just STINKS. But writing that book taught me so much about how to craft a novel and what not to do, and hey, you know what? That’s all good info to have. There’s no shame in it for me. It lead me to where I am now – a published author with a second novel on the way – and so, I’ll own that failed attempt and consider myself luckier for having it.

Last but not least, my favorite question for anyone and everyone I meet: What are you reading?
The Abstinence Teacher by Tom Perotta, Sharp Objects by Gillian Flynn, and Look Me In The Eye by John Robison. They’re stacked on top of my Peoples, US Weeklys and Entertainment Weeklys. I’m a glutton.