Storage Wars for the reading man

Long before there was a TV show about it, Gary shared with me the startling news that if a storage unit is abandoned by the drug lord or dead person or illegal alien or otherwise tragic figure who leased it, the contents are auctioned off after a certain period, and any enterprising or morbidly curious individual who shows up can purchase the contents, usually for a relative pittance. The catch is that you may not cross the threshold until you are declared the winning bidder. You may only survey the stacks from the doorway. It’s a grab bag gold mine for flea market moguls who see dollar signs on every forsaken kitchen chair and for novelists who see a human head in every Rubbermaid bin. I was so there.

Following the storage facility manager down the long row of padlocked steel doors, Gary and I quickly fell in with an interesting assortment of auction regulars. An eighty-nine-year old man regaled us with stories of WWII. A cadre of aggressive yard sale mavens were dubbed the Banger Sisters. A young, African American version of Indiana Jones told us, "I make a better than good living buying and selling these units. I have an uncanny knack for guessing what’s inside the unmarked boxes."

“Ever stumble on anything bizarre?” I asked.

“You don’t want to know,” he said darkly.

“Nothing that exciting. Cremains. You know. A cremated person. Like in a big jar or a plastic box from the funeral home. Some kinky stuff. Once I found a stack of construction grade windows under an old shower curtain.” He brightened with the memory. “Turned them over for twenty-five hundred bucks.”

The manager raised the door on the next unit up for bid. It was empty except for a futon bed with a broken steel frame and visibly crawling mattress next to seven large Rubbermaid bins bound with duct tape.

"Meh," said one of the Banger Sisters. "Five dollars."

“Gary,” I whispered, “if ever there was a human head in a storage unit, I am looking directly at it.”

He gave me the Easter Island face and said, “Do not bid.”

“What do you think is in the bins?” I asked Indie the Uncanny.

He squinted, divining for a moment, then said, “Books.”

The Banger Sisters gave me the stink eye. Gary huffed something Cramdenesque. Who cares? The unit was declared mine!

We hoisted the heavy bins into our truck, guiltily offloaded the wildlife infested futon in a dumpster behind a Chinese restaurant (the other catch is that you have to leave the unit and empty and clean swept) and spirited our treasure trove home to the garage. I slashed the duct tape on the first bin, which yielded a disappointing selection of dusty candles, cheesy inspirational plaques, and pedestrian tchotchkes, the sort of suburban relics that travel from Dollar General to your Aunt Myrtle’s curio shelf to the church yard sale and so on until the Littlest Angel’s head falls off and rolls under the sofa into the landfills of forever.

“Next time, let’s light the twenty-five dollars on fire and drop it down a sewer grate,” Gary said. "Not as many venomous spiders involved.”

"Bingo!" First edition hardcovers of Cold Mountain and Zen and the Art of Motorcycle Maintenance, one of my all-time favorites. "Shaboom!"

I was a big ol' Banger Sister about it, efficiently parsing stacks for sale and keeps. By the middle of the third bin, the story began to emerge. Tom Clancy told me this was a man's book shelf. A thinking man, Carlos Casteneda added. As I sorted the stout library of reference books, including a heavily annotated Cambridge Encyclopedia of the English Language, I realized that this man was (or wanted to be) a writer.

The next bin contained a less interesting assortment of Chicken Soup for the Soul spinoffs and self-help books, including... oh, dear... The Anger Workbook for Women.

The last bin was mostly literary fiction from a variety of brave small and micro presses. I smiled to see a few friends of mine. These were books you have to search for, not books that come easy. Wry, biting, off-the-main-road books. Quietly profound books that so rarely get the attention they deserve.

Marking his place toward the end of a William Gay novel was the last page of a letter from the reading man's mother, pledging whatever help and support she could offer "now that you're handling the boys on your own." A telling PS urged him to reconsider his choice to enroll one of his sons in a program for gifted students. "Sometimes it's better to fit in with the regular crowd," she said, "rather than try to stand out." A nice steamy cup of Chickenshit for the Soul. 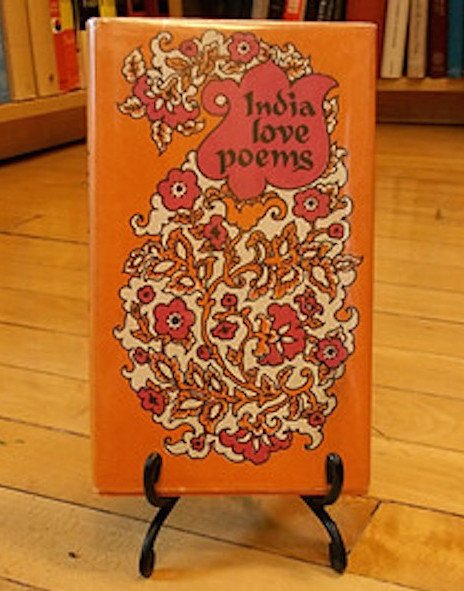 At the bottom of the bin, there was a 1950s children's book about park rangers in Yellowstone and three editions of a high school literary quarterly circa 1971 to 1973. I flipped through the dry pages, looking for the man's name, and I found his byline beneath a few heartfelt but uncompromisingly guy-like poems. The primary contributor to the lit mag was a girl who appeared to be in a very Janis Ian state of mind, which was so me at seventeen.

The last book in the last bin was a little hardcover with a swirladelic orange and magenta cover: India Love Poems published in 1967 by Peter Pauper Press. It surprised me not at all to find that it had been given to him by Janis Ian girl. "Because it seems to me that you brim with love," the inscription said.

She urged him to pursue his dream, expressed certainty that he would someday write important books, and wished him a life filled with peace and joy. The binding of the little book had been gnawed by mice, the pages rippled by moisture and heat. It was the only volume in the entire collection that was in less than immaculate condition, the only one that showed signs of a fearless journey.

So I guess there was a human head in there after all. And a human heart. Evidence of hope and wreckage, of memory and moving on. A lesson in why we keep things. Or don't. Or can't.

I made a conscious decision not to track this man down. His life was his life and none of my business. If he's dead, it's not okay for me to co-opt that tragedy, and if he's alive, it's not my place to Google him up or message him on Facebook, saying, "Here, take back these things you left behind."

It was tempting, though. I'd fallen in love with him a little. Sitting on my garage floor, holding his reverently cared for copy of The Bushwhacked Piano, I cried for the reading man. I too wish him peace and joy.

Colleen Thompson said…
What a moving and wonderful post. I laughed. I cried. You should try to sell it to Chicken Sap for the Soul.

P.S.- I really loved this. I also accidentally posted on top of you, but I'll move it and save for manana.
1:18 PM

Jo Anne said…
Ditto what Colleen said, Joni. Made me laugh & made me cry. I believe in soul connections and for whatever reason, that stuff came to you and a little part of that man/artist will always be part of you. Continuance - ain't it grand?
4:03 PM