By Kathryn Peterson April 03, 2013
As promised, today we continue talking with The Mapmaker's War author Ronlyn Domingue.  Here Ronlyn tells us about the fascinating journey behind the novel's construction and dishes about what's happening with the book now in the wake of the Simon & Schuster and Barnes & Noble contract dispute.

BtO:  You worked on the seeds for The Mapmaker's War for a long time, resulting in the "birth" of not one, but two novels.  Can you describe this process a little for us, and how you felt when you realized that you were really dealing with "twin" novels?

The genesis of this book actually began many years ago. I wrote an alternative assignment for a literature class, a feminist fairy tale about a young girl who lived in a kingdom where women weren’t taught to read. I thought it would make a good novel, so I tried to make a go of it after college, although I had no clue what I was doing. Before I finally shelved it, a subplot emerged about a woman named Aoife who had some distant tie to the narrator of the novel.

Skip forward about 10 years. The project I was working on after my first novel’s publication simply didn’t have much energy. One day, I was procrastinating and found the files for that novel buried in a closet. I started to read the old text. Some of the characters were still interesting to me, and a few sentences weren’t too poorly written. And then, like some strange science experiment, the story transformed within two days. That’s to say, what I had originally planned to write was no longer what this book would become.

And that, too, transformed. The Mapmaker’s War wasn’t supposed to be a novel. I expected Aoife’s subplot to be a small part of an epic story. But in February 2011, during a period when I was concentrating on her alone, I suddenly realized that I was writing two books at once—Aoife’s own and the story to which she was connected. At first, I was frustrated, quite frankly. I hardly felt I had much control over this project to begin with, and then it decided it would be two separate books, requiring a great deal of attention to how Aoife’s story and the other one would work in relationship. Then later, I found peace with it. There was no way I could argue with what the books wanted. Aoife had to have her own say, in her own words. To limit her as a subplot would have been an injustice to the message she ultimately brings. I’m glad it turned out this way.

BtO:  I was dismayed when I heard that The Mapmaker's War was one of the novels caught in the contract dispute between Barnes and Noble and Simon & Schuster. What can readers do about it?  How are you dealing with it? 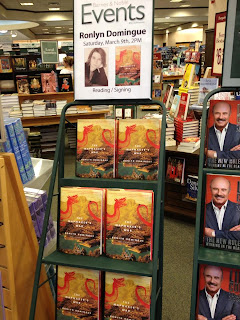 What’s the proverb…May you live in interesting times? It’s definitely an interesting time to be a writer. For those who aren’t familiar with what’s going on, since late January, Barnes & Noble and Simon & Schuster have been in negotiations over terms, from the prices at which books are bought from the publisher to the fees S&S pays for special placement of new titles in stores. I’m among dozens of S&S authors, from debut novelists to mega-bestsellers, whose new books were released this spring. Until this matter is settled, few, if any, copies of our books will be physically available in the stores and none of them will be prominently displayed on the front tables and out-facing shelves. There’s a slight exception for big bestselling authors, but even their stock is limited. This is a really tough situation for everyone involved. We’re all losing something right now—B&N, S&S, and the authors.

What can readers do? Buy our books wherever they choose to and tell their friends about our books. Word of mouth support is what really matters here—and these days, that means readers telling other readers through Facebook, Twitter, Pinterest, Tumblr, blogs, and good old-fashioned e-mails. Posting reviews online is a big help, too.

How am I dealing with it? I spent five years on The Mapmaker’s War. It pushed me to my limits as a writer and human being. I believe in this book and its message of peace and hope, which is why I’m not giving up on it. I’m networking with other writers, using social media to the extent that I can, appealing to my readers to get the word out, and reaching out to independent bookstores that are carrying the book. The support I’ve received from fellow authors has been a tremendous source of strength and comfort. I remain hopeful for my little beastie.

Anonymous said…
This comment has been removed by a blog administrator.
4:53 PM