Books Unbound: Lev Grossman on the state of the publishing industry 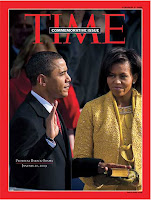 On magazine racks today is the current issue of TIME magazine, which includes Lev Grossman's interesting article on all the reeling and writhing currently going on in the publishing industry.

A lot of headlines and blogs to the contrary, publishing isn't dying. But it is evolving, and so radically that we may hardly recognize it when it's done. Literature interprets the world, but it's also shaped by that world, and we're living through one of the greatest economic and technological transformations since--well, since the early 18th century. The novel won't stay the same: it has always been exquisitely sensitive to newness, hence the name. It's about to renew itself again, into something cheaper, wilder, trashier, more democratic and more deliriously fertile than ever.

I'm freshly back from New York where I had a number of interesting conversations on that very topic this week. I'll share some of the highlights next week. Meanwhile, read the TIME article here.

Suzan Harden said…
Is it just me who's confused by the naysayer reactions? Why is everyone so surprised that publishing is going through major growing pains?

Digital changed the face of the music industry.

I could keep going in this vein forever, but you catch the drift. Now is simply publishing's turn to transform and grow. My great-grandfather had a saying that the only constant in life is change. And this was a man who started life driving horses and wagons and lived to see Armstrong on the moon.
9:48 AM

Joni Rodgers said…
You're absolutely right, Suzan. I think that, as with any major change, people who are afraid of change will drink Pepto Bismal and wallow in what they've lost, while people who are open to change will see new opportunities and get to blazing.

Dorothy Hagan said…
After four years of queries and rejections, I published my book with iUniverse. Beautiful book, still waiting on the million dollar contract. But my day's comin'.

Joni, on a personal note, I just finished Bald in the Land of Big Hair and I am almost done with The Secret Sisters. I absolutely LOVE your writing, characters and stories. I am a busy mom/teacher who NEVER gets time to read. Sadly, my mom had a stroke last Wednesday, and as I have sat by her bedside at the Medical Center your words have been my relief, my calmer-downer, my only joy in a really crappy family time. I had planned to write you a really glitzy fan letter but who knows when I'll get time. Please know you are really an inspiration and a hell of a writer. People like you keep people like me writing.

With deepest respect and best wishes,
Dorothy Hagan
Author, The Edge of the Grace Period
5:28 PM

Joni Rodgers said…
Thank you so much for your kind words, Dorothy. (It's readers like you that keep writers like me writing.)

Please check in and keep us posted on your progress. Meanwhile, peace be with you and your family, along with strength and equilibrium for the continuing journey.

Dorothy Hagan said…
You're welcome, Joni. When I come up for air I would love to comment further on your work.

Grooviness right back to you...