Score one for Joni and Kristin Chenoweth:A rocking great review from PW!

By Colleen Thompson January 12, 2009
Congratulations to Kristin Chenoweth and BTO's own Joni Rodgers on the fabulous Publishers Weekly review for their upcoming memoir collaboration, A Little Bit Wicked, which is due in stores April 14!

As Joni would say, gofightwin, book! Here's the review: 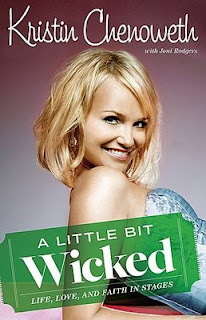 A Little Bit Wicked: Life, Love, and Faith in Stages Kristin Chenoweth with Joni Rodgers. Touchstone, $25 (256p) ISBN 978-1-4165-8055-3
Currently seen as waitress Olive Snook in ABC's Pushing Daisies, the Tony Award–winning singer-actress Chenoweth looks back at her multifaceted career, which has encompassed recordings (As I Am), films (Four Christmases), television (The West Wing), Broadway (Wicked), solo concerts, animation (Tinker Bell), opera and Opryland. Beginning with the intriguing speculation that her unknown birth mother could be watching her career rise, she recalls her Oklahoma childhood and vocal training when she learned "[t]he music didn't come from notes and lyrics; it came from life and mileage." Personal revelations, such as her experiences with Ménière's disease, are balanced with bubbling backstage anecdotes. A chapter about her on-and-off relationship with writer-producer Aaron Sorkin includes a section written by Sorkin himself. With digressions, detours and words like "whack-a-noodle," the book is busy with show-biz flip quips and writing reminiscent of Julia Phillips's You'll Never Eat Lunch in This Town Again (minus the drugs and invective). Chenoweth has a frenzied, free-associative style; it's as if she's speaking breathlessly into a tape recorder between sitcom scenes. To use her phrase, this book is "a hoot and a holler"—a fast-paced frolic that her fans will appreciate. (Apr. 14)

Joni Rodgers said…
Thanks, Colleen. Gotta say, I was particularly delighted to see the comparison to "You'll Never Eat Lunch in This Town Again" -- a book I thought was smart, funny, and painfully right on.
4:59 PM

stacey purcell said…
Wow! What a great critique of the book. I bet it was a fun project to work on with her. I'm headed out the door to buy a copy! Stacey
12:46 PM

Teri Thackston said…
Joni,
I so enjoyed hearing you speak with Colleen and TJ at the NWHRWA meeting...and am so jealous that you got to work with Kristin C. I have loved her since I saw her win the Tony for Your a Good Man, Charlie Brown. I bought her CD with "Let Yourself Go" after I heard her on the radio and have just about worn out the thing.
Congrats on the great review.
Teri
12:47 PM

Colleen Thompson said…
So glad to see folks stopping by. Thought I'd let you know, Stacy, but the book's not out until April 14. Still, I'm sure Joni and Kristin appreciate the enthusiasm! :-)
12:49 PM

Anonymous said…
Congratulations, Joni! It looks like a really fun read!
3:42 AM