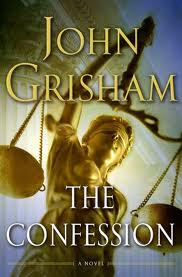 For the suspense lover in your life, 'tis the season to share a pair of powerhouse novels from some of the biggest names in fiction. Both John Grisham and Michael Connelly deliver bestselling pageturners focused on the topic of exoneration.

John Grisham's The Confession starts with a Lutheran minister whose peaceful routine shatters when a truly-vile ex-con confesses that he is responsible for the abduction/rape/murder of a seventeen-year-old cheerleader nine years earlier - a crime for which an innocent man is about to be put to death in Texas. The breakneck race to stop the execution will keep you reading past your bedtime and the egregious, ripped-from-the-headlines "justice" system foul-ups will and definitely should infuriate you.

There's nothing subtle about Grisham's anti-death penalty novel. Every character, from the racist, good ole boy governor and his cronies right down to the grief-wallowing, vindictive drama queen mother of the victim, working to carry out the outrageous punishment is painted in broad, reprehensible strokes. The people of Texas are portrayed as a bloodthirsty lot, and those fighting to stop the runaway train are either brave and virtuous or at least brave and wonderfully colorful. For all that, the story has an unstoppable momentum that makes it nearly impossible to put down, and I can easily see it coming to the big screen soon.

Michael Connelly's latest, The Reversal, has the former shyster-lawyer-with-a-conscience Mickey Haller crossing the aisle to work as a special prosecutor on a political hot potato of a case - the almost-impossible mission to successfully re-try a supposed murderer whose case was overturned due to DNA. In a case of nepotism-gone-wild, Haller brings in his recently-acquired half-brother LAPD Detective Harry Bosch (and presumably his many, many fans) as an investigator and uses Haller's prosecutor ex-wife, the inimitible "Maggie McFierce" as his second. As with most of Connelly's books, the mystery is first-rate and beautifully constructed, and this novel, far more subtly drawn, lacks the agenda of Grisham's The Confession.

That said, I didn't enjoy The Reversal as much as Connelly's first Mickey Haller story, The Lincoln Laywer, or even its follow-up, The Brass Verdict. What drew me immediately to the Mickey Haller character, who defended tough dudes against long odds while working from the back of his Lincoln Town Car, was his awakening to the ethics of the semi-sleazy tactics that were always landing him in trouble. It simply wasn't as much fun to see him working for the state, the suspense didn't feel as urgent, and I've never completely bought the Haller-Bosch connection. Still, Michael Connelly is one of the greatest crime novelists writing today, and I happily devoured every page and am already looking forward to his next.

If you have a reader who, like me, can't imagine a holiday season passing without a big pageturner of a suspense novel, I recommend giving Grisham's and Connelly's latest a try.