What does an author do with an ugly baby?

By Joni Rodgers March 07, 2012
A few weeks ago, I put it out there to the universe: "Does this book cover suck?" The answer was a resounding "Yup."

Urg. The backstory on this book cover is fraught. Though I have a bit of graphic arts background and a lot of experience in book cover brainstorming, I didn't want to trust myself. I had it designed by a *real* designer. I hated the result, so I threw some good money after bad and had it redesigned. Then I decided to cut my losses and re-redesign it myself.

When I put all the covers side by side in front of a few trusted advisors (without telling them which ones were designed by me and which were the low-priced-and-you-get-what-you-pay-for *real* designers), they unanimously picked the two designed by me.

I went with the image of a dopler radar view of Hurricane Katrina in infrared technicolor splendor and launched the book with a not inexpensive ad campaign earlier this year. (Thanks for the birthday bucks, Mom! Wish I'd used the money to come visit you.)

Much to my dismay, the book just laid there.

It's painful (and not inexpensive) to realize that after years of gestation, one has given birth to an ugly baby. In the traditional publishing world, this would have been the death of the book, unless the publisher did a total overhaul for the paperback. And if it was an ugly paperback originally, game over. As an indie, I have the power to do something about it.

So I put the question out there, offering a free book to anyone who flipped me an email with a candid answer, and I got an interesting variety of responses.

About 25% said, "No, it doesn't suck! It's cool!" or some such. About 25% said, "The image is too swirly/ red/ confusing/ violent/ science-ish/ literal/ impersonal." About 50% said, "I like the image, but the title is too big/ too small/ should be more off-center/ should be more on-center/ lighter/ darker/ lower/ higher" or something to indicate something indefinably off about the font and/or copy.

Several people suggested a book cover has to have people on it, and the two of the four covers I'd originally had designed did have a pair of lovers in the clinch. More than one person looked at those and said, "I don't really like them, but you should probably use one because sex sells." (I don't think that holds true in literary fiction, by the way.)

Finally, one respondent hit the nail on the head. I knew the moment I read it that he was absolutely correct, as much as I hated to admit it. He said, "The masculine image doesn't go with your girly name. If it had said 'Tom Rodgers,' I'd have bought it."

Like it or not, there are deep gender biases inherent in publishing, and they stem directly from buyer behaviors that book buyers are not even aware of. I realized that the suggestion that it should be "more personal/ warmer/ less science-ish/ more... something else" actually meant "more feminine" so as to appeal to my audience, which is obviously not men, especially when my first name has that little clitoris over the i. (The in-house designer on one of my previous books told me I should always have my name in all caps, but at the time I didn't connect the dots, as it were.)

Book buyers (including me) do judge books by their covers, and there's an unspoken, mostly unconscious, but very real perception that men write books for readers, and women write books for women. That's bull, of course, but that's the perception, and anyone marketing books ignores it at their peril. 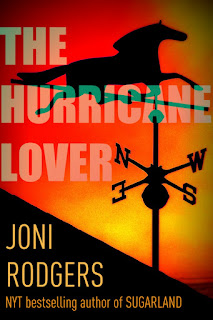 So I re-re-redesigned the book cover, and I'm re-releasing it this week. I've been assured by my trusted advisors that my baby is robustly beautiful now, and I took advantage of the reload to tweak a few typos missed by the copyeditor.  Like I said, you get what you pay for, and one of the big hurdles in indie pub is being able to afford the services we've always had provided by our publisher. (Not to say that the publisher's covers and copyediting are always great, because they can and do suck on a regular basis. This was not my first ugly baby. Just the first one for which I had to accept sole responsibility.)

From start to finish, it's been a learning experience, and I know my next novel will have a stronger launch because of it.

I hope this book will find a broad, varied audience. Frankly, all I've cared about since the beginning was what this baby was like on the inside. All that matters to me is getting this story into the hands of readers. The cover has to function as a welcoming doorway. So here's my best attempt at that.

Hopefully, the colors, movement and general vibe will indicate that it's about meteorological weather and about political climate. It's not a romance, but there's a love story and a lot of passion in all its iterations.

Update: In less than 24 hours, The Hurricane Lover was in Amazon's top 20 overall, #1 on both literary fiction and suspense lists. Apparently, the new look is working!