By Colleen Thompson November 21, 2013
If you're like me, there are a few special shows you're so hooked on, you tune in every week and never miss an episode. My next full-length romantic thriller, The Best Victim, will be released in that same fashion, with each weekly episode ending in cliff-hanger fashion, beginning with Episode One's release on Nov. 26th. 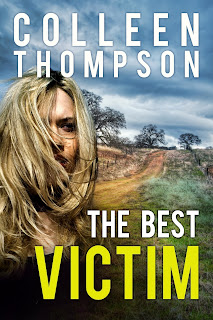 Here's the cover copy, to whet your appetite:


You don’t deserve to live.
The ugly words delivered online finally hit their mark. The younger sister of web security specialist Lauren Miller took the taunts to heart—and took her own life. Devastated, introverted Lauren has nowhere else to turn but the arms of a man who shares a similar pain…and a burning need for vengeance.
FBI agent Brent Durant is determined to unmask the Troll King, a vicious Internet stalker he suspects of preying on the weak, goading his victims into suicide. Victims like Lauren’s sister. Working off the grid as a rogue agent, Brent risks it all—even his freedom—to bait the clever killer. But when he involves Lauren in his deadly game, their unexpected chemistry complicates an already tangled web. With his dark obsession all-consuming, can there be any room in Brent’s life for the passion Lauren stirs within him?

What's been fascinating to me, as I embarked on this venture with Amazon's Montlake Romance, is that the serial is nothing new at all. So many of the books we now consider classics were originally published this way, from Tolstoy's Anna Karenina to Jack London's Call of the Wild to a host of Dickens' classics, including David Copperfield. Eager readers followed the story via their favorite magazines and newspapers. Only later were the episodes compiled in a single volume.

These days, serials such as The Best Victim are usually first published electronically, delivered weekly to the readers' Kindle devices for one low price ($1.99, in my case, for all the episodes). Once the novel is completed, usually in about 9-10 episodes, it will then be published (at a higher price point) as a single volume, in electronic, paperback, and audio editions.

Writing the book has been both a delight--I love these characters so much--and a challenge, as I'm frequently composing one episode, doing developmental edits on another, and sometimes also copyediting a third! Fortunately, I plotted the book in detail ahead of time and outlined which events would occur in which sections, which has proven crucial in keeping me on track.

If you're a Kindle reader, I hope you'll consider preordering or jumping in with the episodes at any point. If you'd prefer, however, late April will mark the release of the full-length novel.