By Joni Rodgers November 24, 2013
Tomorrow morning, piano movers are coming to pick up the vintage Acrosonic piano that's lived in our dining room for about 15 years. Esmerelda, as I called her, will be going to a wonderful family, and Gary and I will be one step closer to our goal of owning nothing larger than a suitcase. Feeling a bit nostalgic, I thought I'd share a tidbit from Earth to Joni, my syndicated column of yore. This piece originally ran in newspapers in January 2003. 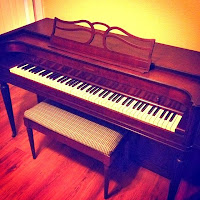 On my twenty-first birthday, I made a list of goals for the next twenty years. Approaching my forty-first birthday last week, I had to accept that I was not going to Harley across India, learn to speak French, or procure a third child by Wednesday. Fortunately, I came in just under the wire on one item. At this unlikely age, I’m learning to play piano.

We purchased the secondhand spinet two years ago, envisioning our 12-year-old daughter Jerusha thundering Bach and Rach. Unbelievably, Lil' Miss Bad Seed had the nerve to tell us she didn’t want to play! She wanted to do gymnastics.

“You’re too old for gymnastics,” I told her. “They measure girls in dog years. Twelve is like Margaret Thatcher. You’re taking piano.”

“You can’t make me!” she cried. (Red flag words no adolescent should wave in Mom's face.)

Determined to bless her with this opportunity, whether she liked it or not, I said, “Sweetie, music is the melding of spirituality and mechanics. I’d have given anything for piano lessons when I was your age. Just looking at it makes my whole soul hungry.”

“Why don’t you play it then?” said Jerusha.

“Sure,” I huffed. “I’m going to learn piano at my age. Just like you’re going to start gymnastics at yours.”

The piano sat idle for months. My hunger to hear it played lingered, along with my daughter’s inability to see how much joy I was trying to shove down her throat. Meanwhile, Jerusha watched the International Games and did back bends over the easy chair.

She was less than graceful. Fish out of water at best, head-bonking at worst, but her tenacity inspired me. One day, arriving to fetch her from a friend’s house, I was appalled and enthralled to discover her on a backyard trampoline, flipping socks-over-teakettle, performing some fairly impressive acrobatics in defiance of gravity and my expectations.

Not long after that, I approached the piano like one of those monkeys at the beginning of 2001: A Space Odysey. I set my hand on the megalith and plunked a tentative “Mary Had a Little Lamb.” After an hour, though it was fish out of water at best, head-bonking at worst, I could sort of play “Norwegian Wood.”

Having learned basic party-caliber guitar as a teenager, I quickly realized the piano is just an 88-string guitar. Chords are chords. The shape of the instrument has no effect on basic music theory. The secret to playing keyboard by ear is giving it the finger. Yes, that finger. To play a G chord, for example, place That Finger on G, and a higher intelligence in the hand does the rest; the pinkie finger goes up a third to the B, and the thumb rests a natural fourth down on the D. Flip off middle C; pinkie is on the E, thumb craves the G.

Soon I had all the basic chords, plus variations, which probably have technical names, but I just call “Claptonized”. I’m still slow to read notes, but I can accompany hymns and Beatles Anthology sing-alongs and even play a few classics by ear. (Beethoven’s “Moonlight Sonata” was born for the That Finger method.)

For thirty-nine years, I had this treasure in my hands and never knew it. I always said, “I’d give anything to play piano,” but I never gave the one thing required: the simple act of sitting on the bench. In my twenties, I dabbled, stank, and quickly gave up. Ambition faded to dream, dream to pipe dream, pipe dream to impossibility.

Then along came Jerusha.

She’s taught me that if you’re brave enough to accept being temporarily dreadful at something long enough to give it the effort it won’t be denied, you’ll be like the very first fish-out-of-water. You’ll flop around for a while, and then you’ll evolve.

Post Script from the here and now: I played the piano thousands of hours during the subsequent ten years. I was never fantastically great at it, but it gave me a huge amount of joy. Jerusha is all grown up, and this year, in addition to donating bone marrow to a little boy with leukemia, she launched her own freelance editing firm, Rabid Badger Editing.

If you'd like to read more tidbits from Earth to Joni, check out my mini-memoir, Love & Other Natural Disasters.