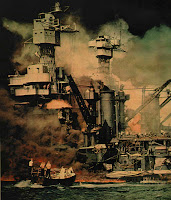 A wonderful piece in this morning's Houston Chronicle: "Letter from Pearl Harbor" features US Army librarian Helene Gowan's calm account of Dec 7, 1941. I guess a librarian would know better than anyone that history requires a witness and she gives us that without embellishment, without claiming any part of the devastation that doesn't belong to her or generating any additional panic. The event is so huge, any hint of melodrama would have dishonored it. There's no bleating, no superlatives. All we need is that glimpse of the rising sun. A lesson for writers.

From Ms. Gowen's letter to her family:

About ten minutes to eight Sunday morning we were awakened by a noise of planes, and what sounded like bombing and firing - we, of course, like many others, thought it was just a practice alert. I put on my coat over my pajamas, went out to get the paper, and when I failed to discover it, stayed for a while to watch the planes which were flying very low. The Rodby boys, also pajama clad, suddenly appeared, explaining breathlessly, "Oh, Miss Gowen, this is a raid - see the rising sun on those planes, and look at the smoke over there." Just then, one dived even lower, and I could see what appeared to be a rising sun but thought it was just my imagination. Mil' looked out the window to say she was almost shaken out of her bed and she wished they wouldn't have such noisy alerts on Sunday. We decided, since we were awake, to go to nine-fifteen Mass...

(At this moment, there doesn't seem to be a link to the article on Chron.com, but I'll check back later and post it if I can.)

Susan C said…
While I was reading this, I heard the unmistakable sound of a stealth bomber fly over in Pasaadena. I was relieved when I found out it was part of a memorial service for an air force big wig.
1:26 PM