A broad canvas and the mess that makes it real: 3 Qs for Jasper Fforde, author of the Thursday Next series 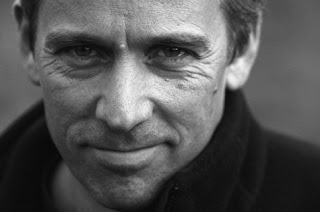 With a fresh Thursday Next book available in stores and online this week, Jasper Fforde stops by to answer 3Qs...

Jasper, thanks so much for taking time to visit. I've been hooked on Thursday Next since I listened to The Eyre Affair

while driving across Montana. At the time you wrote it, did you see the series continuing indefinitely or did you start with a specific number of books and a full story arc in mind?
The Eyre Affair was originally intended as a standalone book, and indeed, when I wrote it in 1996, that's all it was. I wrote another two and a half unpublished books before it was accepted for publication in 2000, and I was then asked if it could have a sequel. I said 'Yes' because I wasn't going to say 'no' given that I had waited ten years and seven and a half books to be published!

I think they were expecting a similar tale where Thursday fixes up a problem in another classic, but I rarely like to do what is expected and instead expanded on the idea of a 'Bookworld' on the other side of the written page, with Jurisfiction, a Policing Agency, to look after it. I'm very glad I did as it has created a very broad canvas into which I can fit almost any idea I want.

This series is such a natural place for evolving Harry Potter fans to go as they grow up. (As a nerdy, Bronte-addicted teen with a horrible attitude, I would have adored Thursday Next!) Do you find yourself wanting to speak to smart young readers about their complicated world or do you abide by the "if you want to send a message, use Western Union" credo?
I am here primarily as an entertainer. Someone to make waiting times in airports disappear. If a reader enjoys my books and even laughs out loud - I'm happy. But if you're the sort of reader who wants something to think about, then that is there too - there are serious threads running through the books, from comments on the human condition to political satire. I think multi layered books are more enjoyable, and add extra depth to the reading experience.

A literary agent suggested this series to me as an example of brilliant world-building, and I've passed that suggestion to other writers. What advice do you have for authors attempting to create an alternate world that feels this rich and real?
It's all in the detail. Large and expansive set pieces are all very well, but its the mess and clutter that make it real. Hovercars and Rayguns are fun of course, but I'd concentrate more on the drains. Much of our lives is spent with the everyday mundanities of life, not the exciting bits. Okay, so we've got to repel an attack by the seven-headed Zook of Zargon, but where the hell did I put my keys? And shall I drop in the dry cleaning on the way?

Jasper, thanks again for your time. I'm already looking forward to the next Next! Bonus Q, if you're so inclined: What are you reading?
Right now? An autobiography of Roger Moore, that iconic non-acting actor that I remember so well from my childhood. He's a very engaging writer, and an easy read.

Visit Jasper Fforde's website for Toad News, Fforum, and much more (including a pointed message from Jasper's Mum.)

Colleen Thompson said…
Now, you've done it. I'm clearly going to HAVE to read this series! Thanks for stopping by, Jasper. I can't wait 'til Thursday Next.
11:59 AM

Kathryn Peterson said…
Thanks so much for stopping by, Jasper! It sounds great!
11:17 AM