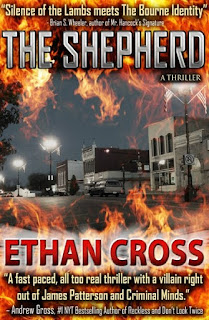 This week, Ethen Cross (the freshly minted identity of a midwestern thriller writer) base jumps to a new genre with his novel The Shepherd


Marcus Williams and Francis Ackerman Jr. both have a talent for hurting people. Marcus, a former New York City homicide detective, uses his abilities to protect others, while Ackerman uses his gifts to inflict pain and suffering. When both men become unwilling pawns in a conspiracy that reaches to the highest levels of our government, Marcus finds himself in a deadly game of cat and mouse trapped between a twisted psychopath and a vigilante with seemingly unlimited resources. Aided by a rogue FBI agent and the vigilante's beautiful daughter -a woman with whom he's quickly falling in love- Marcus must expose the deadly political conspiracy and confront his past while hunting down one of the most cunning and ruthless killers in the world.

Thanks for taking time to visit, Ethan. How are you? Is launching a book in the current publishing climate turning your brain to patty melt or are you having a great ride?
Hmm, great ride or patty melt… A little bit of both, I suppose. It’s been a wild ride filled with a lot of ups and downs. And it’s amazing how much work goes into the promotion of a book and how easy it can be to fall down the promotion rabbit hole. I think the hardest part of it all has been trying to manage all of the promotion work that needs to be done along with writing. There are only so many hours in the day, and I have yet to shake the shackles of the day job (the darn kids keep crying out for their food and shelter…).

In that case, let's get down to business and plug the book. Brian S. Wheeler's description ("Silence of the Lambs meets The Bourne Identity") was enough to make me take notice, but my TBR pile is tall. Tell me why I should move The Shepherd to the top of the heap.
Without quoting another blurb or running through the standard book description, I would say that my goal with The Shepherd

was to write a book that I would want to read. And I love books that are fast-paced with a lot of action. I tried to take the serial killer genre but put a slightly different spin on it (and the book also revolves around a larger conspiracy in which the killer plays a part). There are a lot of books out there that feature the hunt for serial killers; after all, these men are like aliens among us. They think and act in ways that most of us cannot begin to comprehend, which in turn makes them fascinating. But while most novels of this type take the police procedural approach and the following of clues to find the killer (and my book does have some of this), The Shepherd

is designed to get the reader into the killer’s head and wonder how the other characters are going to escape. In other words, it’s not a “follow the clues to unmask the killer” type of book. It’s more a “oh my God, he’s in the next room…and he’s got a shotgun” type of book. 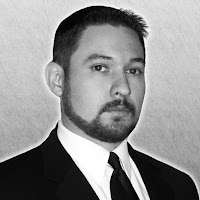 Your bio says, "Ethan Cross is the pen name of a thriller author living and writing in Illinois with his wife, two daughters, and two Shih Tzus." Why two? (Identities, I mean, not Shih Tzus.) And what's different about style and creative process between the two?
Why use a pen name? Well, the easiest answer is that my agent told me to. But in truth, I always knew that I would have to use pen names. This is because the publishing industry wants authors to be established as a brand just like any other product. They want people to be able to pick up any Ethan Cross novel and know what to expect. It's a sound business principle. It's kind of like the concept of Pepsi versus Mountain Dew. If you opened up a Pepsi and it tasted like Mountain Dew, you would probably be shocked and disappointed. You may even like Mountain Dew, but you sat down expecting a Pepsi since that's what you bought. It's the same idea with an author. I want readers to pick up an Ethan Cross novel and be able to count on a breathless, fast-paced suspense thriller. I do plan, however, on writing books in several different genres including action/adventure, science fiction, literary fiction, horror, fantasy, or whatever good idea comes along. I love all types of books and stories and have ideas that don't fit into one type of box. But those ideas will fit into a box because they will be under different names. So nobody will buy an Ethan Cross book and get a bad taste in their mouth expecting Pepsi but receiving Mountain Dew instead.

Bonus Q: What are you reading?
I pretty much enjoy any book that’s action-packed, regardless of genre. There are also those rare books that are a slow burn but are still completely enthralling for a variety of reasons, but those are few and far between. I love David Morrell, James Rollins, F. Paul Wilson, Dean Koontz, Jeffery Deaver, James Patterson, Douglas Preston, Clive Cussler, and many, many more. Currently, I’m reading The Fall

by Jonathan Maberry. But I just finished reading First Blood

Colleen Thompson said…
Hi, Ethan, and welcome to Boxing the Octopus. Best of luck with the new release.

Speaking of best, love your description of the basic diff between mystery and suspense. ("Oh, my God, he's in the next room!")
8:43 AM

Charles said…
An interesting interview, will look out for the book, loved your list of other authors that you read, I am also a big fan of Clive Cussler!
10:35 AM