David Denby on the destructive creep of snark 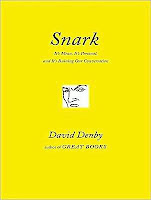 David L. Ulin posts an excellent, thought-provoking review in today's Houston Chronicle, commenting on Snark: It's Mean, It's Personal, and It's Ruining Our Conversation by David Denby (author of one of my favorite tomes, Great Books.)

God save us from Gawker’s world.

The New York-based media gossip Web site, which launched in 2002 and has distinguished itself by, among other things, attacking writer Neal Pollack’s young son, Elijah, is generally regarded as the prototype of a new style of cultural discourse: dismissive, superior, jaded, marked by what David Denby, in Snark: It’s Mean, It’s Personal, and It’s Ruining Our Conversation, calls “false knowingness,” a way of pretending to be more clued-in than it is.

Denby quotes Gawker founder Nick Denton: “The ideal Gawker item is something triggered by a quote at a party, or an incident, or a story somewhere else and serves to expose hypocrisy, or turn conventional wisdom on its head, and it’s 100 words long, 200 max.” This, Denby continues, is “snark’s mission statement — indolent parasitism as a work ethos.”

Snark aspires to make a counter-argument: that the culture of mean, as exemplified by Gawker, TMZ and Perez Hilton, is not just idiotic but a dehumanizing force. “We are in a shaky moment,” Denby writes, “a moment of transition, and I think it’s reasonable to ask: What are we doing to ourselves? What kind of journalistic culture do we want? ... What kind of national conversation?”

These are excellent questions, the kind any thinking person ought to be asking as the top-down authority of traditional media yields to the fluidity of the electronic frontier. What makes this new paradigm so exciting, after all, is what makes it so unsettling: that we can respond to anything instantaneously, almost without thinking, Twittering and posting and YouTubing in an endless monologue, like Joyce’s stream of consciousness run amok.

The hilarious footnote to this post is that when I went to Amazon to grab a link for Denby's book, I couldn't help but notice that it has been (predictably) lambasted by two dozen snarky one star reviews.

Colleen Thompson said…
I read the review in this AM's Houston Chronicle, too.

Though snark's always been with us (the are many examples of authors and others from centuries past publicly trashing each other) I agree that it's gotten way out of control -- from the nastiness that is talk radio to the drive-by potshots the abound in the mainly-anonymous world of the 'Net, way too many people have indulged their inner ugly. Mean-spirited gossip is not only a destructive force to the target, it coats whoever's dishing it with a foul layer of slime.

And way more often than people realize, snotty comments come back to haunt one. I can think of authors who have severely damaged their own careers by getting caught snarking, either in a public venue or on the 'net.
11:32 AM

Suzan Harden said…
I wish this phenomenom was restricted to the 'Net, but my co-workers and I have noted and watched it in day-to-day life. It's kind of scary that folks don't have a more positive way of dealing with the extreme stress of our current economy.
2:22 PM