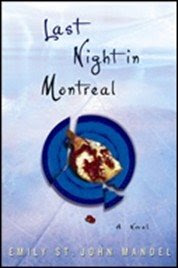 Up to my eyes in research, rough writing, and revisions on a work in progress, I have absolutely no time for pleasure reading right now. So it was a huge mistake to allow even a passing glance at an advance copy of Emily St. John Mandel's lovely debut novel, Last Night in Montreal. I can't help it; I am about to utter the hacky cliche of all book recommendations: I couldn't put it down. The words "pleasure reading" hardly begin to describe it. This was somewhere between a spa treatment and mid-day lovemaking. It's a mystery and a love story, a twisting path through the heart and mind of a richly drawn character. 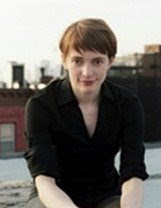 Lilia Albert has been leaving people behind for her entire life. She spends her childhood and adolescence traveling constantly and changing identities. In adulthood, she finds it impossible to stop. Haunted by an inability to remember her early childhood, she moves restlessly from city to city, abandoning lovers along with way, possibly still followed by a private detective who has pursued her for years. Then her latest lover follows her from New York to Montreal, determined to learn her secrets and make sure she’s safe. Last Night in Montreal is a story of love, amnesia, compulsive travel, the depths and the limits of family bonds, and the nature of obsession. In this extraordinary debut, Emily St. John Mandel casts a powerful spell that captures the reader in a gritty, youthful world—charged with an atmosphere of mystery, promise and foreboding—where small revelations continuously change our understanding of the truth and lead to desperate consequences. Mandel’s characters will resonate with you long after the final page is turned.

This is not the blockbuster you're going to see on an endcap at Borders, but I hope hope hope it catches on with book clubs. There's so much fertile ground for discussion here, and this talented author deserves the affirmation.

Warning: If you read the following excerpt, you will want to read more.

No one stays forever. On the morning of her disappearance Lilia woke early, and lay still for a moment in the bed. It was the last day of October. She slept naked.

Eli heard the sounds of awakening, the rustling of the duvet, her bare footsteps on the hardwood floor, and she kissed the top of his head very lightly en route to the bathroom—he made an agreeable humming noise but didn’t look up—and the shower started on the other side of the almost-closed door. She stayed in the shower for forty-five minutes, but this wasn’t unusual; the day was still unremarkable. Eli glanced up briefly when she emerged from the bathroom. Lilia, naked: pale skin wrapped in a soft white towel, short dark hair wet on her forehead, and she smiled when he met her eyes.

“Good morning,” he said. Smiling back at her. “How did you sleep?” He was already typing again.

She kissed his hair again instead of answering, and left a trail of wet footprints all the way back to the bedroom. He heard her towel fall softly to the bedroom floor and he wanted to go and make love to her just then; but he was immersed so deeply in the work that morning, accomplishing things, and he didn’t want to break the spell. He heard the dresser drawer slide shut in the bedroom.

She came out dressed all in black and carrying the three pieces of a plate that had fallen off the bed the night before; it was a light shade of blue, and sticky with pomegranate juice. He heard her dropping it into the kitchen trashcan before she wandered past him into the living room. She stood in front of his sofa, running her fingers through her hair to test for dampness, her expression a little blank when he glanced up at her, and it seemed to him later that she’d been considering something, perhaps making up her mind. But then, he played the morning back so many times that the tape was ruined—later it seemed possible that she’d simply been thinking about the weather, and later still he was even willing to consider the possibility that she hadn't stood in front of the sofa at all--had merely paused there, perhaps, for an instant that the stretched-out reel extended into a moment, a scene, and finally a major plot point.

Emily St. J. Mandel said…
What a great blog this is -- I'd never been here before, but someone just sent me a link today.

Thank you so much for your kind words; I truly appreciate your support, and I'm delighted that you enjoyed reading Last Night in Montreal.
3:14 PM

Joni Rodgers said…
Welcome to the sisterhood, Emily. You've written a beautiful book, and we wish you great success with it. Keep us posted.
4:16 PM