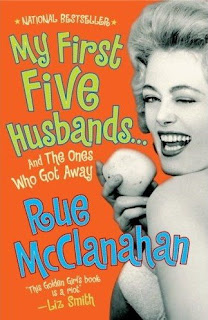 Below is a little blast from the past in celebration of my dear friend Rue McClanahan's 75th birthday. Rue is one of the dearest most delightful people I know and still every bit the comedic genius she was when Maude was the first feminist on TV. Shortly before she joined the cast of Maude, Rue (who was classically trained in dance at Jacob's Pillow and in acting by the legendary Uta Hagen) did the play Dylan in New York, and Tennessee Williams attended a performance.

"Your work has that rare combination of earthiness and lapidary polish," Williams wrote to Rue, "that quality of being utterly common and utterly noble. Frippery combined with fierceness."

From Rue's memoir My First Five Husbands...and the Ones Who Got Away (which is currently being adapted for Broadway): "Even as a child I had the strong feeling that life is good. I had passion for work, an openness to love, and a penchant for joy. In a word, I had hope. I still have it."

Colleen Thompson said…
Happy birthday, Rue! And bigtime congratulations on the Broadway adaptation of MY FIRST FIVE HUSBANDS! My fingers are crossed that it will blaze forward.

Love this clip! What wonderful timing!
7:20 AM

Joni Rodgers said…
That's really a great bit of writing, too. All that stealth exposition! I miss the days when sit com writing and staging was so directly akin to theatre. Every ep of "All in the Family" was like a little Noel Coward play.
7:27 AM