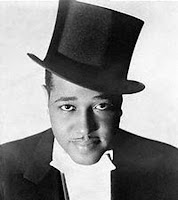 Every book has a soundtrack. The reader doesn't necessarily hear or even suspect it, but I need that music to anchor me to a certain tone, a certain time and place. I'm beginning a novel that will bring me back to some of my favorite Duke Ellington music in the coming months, and I'm looking forward to that. Here's what The Writer's Almanac has to say about the Duke today:

It's the birthday of Duke Ellington, born Edward Kennedy Ellington in Washington, D.C. (1899). After high school, he worked briefly as a soda jerk, and his first piece of music was called "Soda Fountain Rag," (1915). He composed it in his head before he'd even learned how to write or read music. When he first started playing with a band at local society balls, they would often play "Soda Fountain Rag" over and over again. Ellington said, "[We] would play [it] as a one-step, two-step, waltz, tango, and fox trot. Listeners never knew it was the same piece. I was established as having my own repertory."

After moving to New York City, Ellington expanded his band to 14 musicians. As pianist and composer, he began to produce musical compositions that went beyond the typical three-minute jazz tunes for dance clubs, and he became one of the first Jazz composers to get respect from the classical music establishment.

Duke Ellington said, "Roaming through the jungle of "oohs" and "ahs," searching for a more agreeable noise, I live a life of primitivity with the mind of a child and an unquenchable thirst for sharps and flats."