Thoughts on a rainy Easter morning 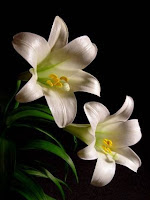 Easter is a big deal in my latest novel. There's a character named Easter; a little girl who's killed by a drunk driver -- her aunt, actually. Someone with the best of intentions, but very bad judgment. The title of the book, The Secret Sisters, refers to the women who went to Jesus’ tomb on the third morning after the crucifixion and found the tomb empty.

"Why do you seek the living among the dead?" angels asked them. "He is not here. He is risen."

Two thousand years after the angels posed that question to the Secret Sisters, I’m wondering the same thing. And I wanted to ask that question with this book. Are we looking for God in all the wrong places?

Too many people of all religions -- many with the best of intentions but very bad judgment -- seek God among dead teachings that spout God's name, but were designed by men to divide and control.

God is not there.

He is among the living. The loving. The open-minded. The practitioners of daily loving-kindness. He rises up with the peace-makers and the forgivers and the healers.

I know that my redeemer lives. As surely as I know the sun has already risen on the flipside of the cold, rainy skies this morning. It fills me with enormous hope.

Jen said…
I'm agnostic, but I believe that, if there's a god(s), S/H/They isn't/aren't as depicted in any one religious text. I believe those texts were written by men, with the beliefs and attitudes of those times, and even written to favor men. What you said, that people "seek God among dead teachings that spout God's name, but were designed by men to divide and control," is very much how I feel.
12:48 PM